Can put a temporary protective buff on your subjects

The warhorse[1] is a defensive mount that can seal Kingdom subjects with a protective aura.

It's found in a battlefield in the plains.

It's the second slowest mount when galloping, just a bit faster than the lizard. It's endurance however is matched only by the draft horse.

The warhorse is the default mount in Plague Island.

The warhorse is found in an abandoned battlefield in a clearing between two sections of forest. It grazes around the remains of a fallen monarch, a skeleton of a king/queen dressed in the colours of the previous kingdom's coat of arms, and leaning against a rock that has a sword embedded in it. The skeleton seems to be redeemed, and vanishes when the Monarch rides the warhorse for the first time.

At about every fifteen seconds, making the horse gallop activates a protective spell that lasts for about twelve seconds. Its armour glows along with a limited number (around twenty) of nearby subjects (villagers, builders, farmers, archers, squires and knights). They receive a temporary buff to their defences. This spell though doesn't increase the defenses of archers and builders against floaters, when they're on top of towers.

This mount is unlocked on the fourth island but can then be encountered on any island. It has noticeably more stamina than the original horse (and slightly more than the black horse), but has the same speed. 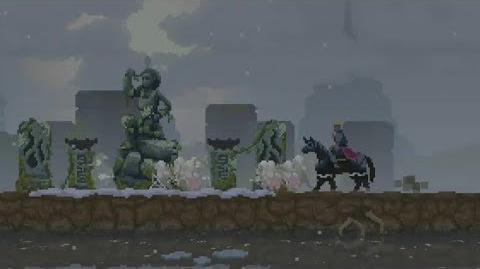 The warhorse is slower here, and the special ability cooldown is longer, letting subjects exposed for some seconds between the spell castings. He's always on the third island and costs two gems to unlock and eight coins to ride it. With a few tweaks, it is the default and only mount available on Plague Island. As of the Conquest Update, the ability is no longer triggered automatically by sprinting but is activated by the mount ability control.