No job (he needs a tool)

The villager is an unarmed subject of the Monarch's Kingdom who has not yet been assigned a role.

The villager's clothing of choice appears to be plain robes of various colors.

Kingdom Two Crowns – Not to be confused with citizens, who dress similarly but exclusively in white.

Villagers can be acquired by recruiting vagrants from vagrant camps. This is done by tossing a coin to the vagrant. Once recruited, the new villager will walk to the town center and remain idle, wandering aimlessly, until assigned a job. Regularly visit vagrant camps nearby to recruit vagrants and gain more villagers, and don't worry if you can't assign them a role right away. Once they are recruited, they will stay within the kingdom's walls indefinitely, unless they are attacked by an enemy.

Avoid recruiting villagers from camps that are farther away, or do so when it is very early in the morning to give them time to enter your kingdom before nightfall. 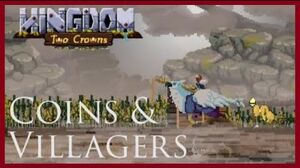 Villagers are one of the most crucial elements of the game, as they can be assigned to become either an archer, a builder, a farmer, a knight, a pikeman, or a ninja if they pick up any of the corresponding tools: a bow, hammer, scythe, shield, pike, katana or sword.

When attacked, villagers will drop the gold coin that had been originally given them and turn back into a vagrant.

Villagers can only hold up to two extra coins at a time for their personal protection.

In Kingdom: Classic, villagers are known for "destroying" coins. See the details on Coin § Disappearing.