Trade Routes is a challenge island that takes place in Dead Lands, across two sister islands and revolve around a goal of uniting two Kingdoms separated by the collapse of a great bridge.

There are two small portals on both sides of the town.

As usual, cliff and dock sides are random.

Single player – Only masterminding rulers will find this crown!

Destroy all portals and the cave on both islands.

Cooperative – Only for masterminding unhesitating rulers!

destroy both caves before day 40 and make 4 or fewer boat trips.

It's very important on the winter island to budget precisely your spending and to know how many of each archers, builders and farmers you'll hire. Four, two and two works fine. Farmers will only harvest berries, which are a fair source of income. Alternatively you can herd deer towards your hunters.

You can't recruit anyone, so as soon as possible, start building the boat and escape to the summer island so you can build an army, and then return to the first land.

The following video is a basic guide for earning the cursed crown in Trade Routes: 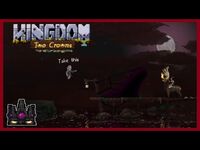