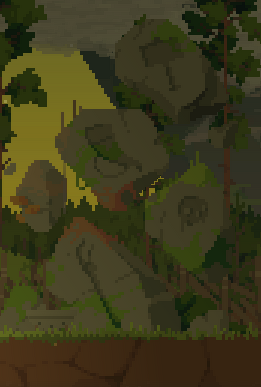 Stones of Power are a new feature in Norse Lands, somewhat similar to the alternative Monarchs of Dead Lands. Rather than switch between monarchs with inherent abilities, the one monarch must scour the islands of their kingdom to find a variety of puzzles and sacred stones that will grant a power upon completion. The monarch begins with no abilities.

The Stone Totem will appear within the kingdom's borders once a sufficient technological tier has been achieved, and the bounds of the wall have spread far enough, on the side that does not have the scythe vendor. All unlocked powers will be available from the totem once unlocked, costing five coins to switch between each.

The majority of the Stones of Power require the monarch to solve a form of puzzle, ranging in relative difficulty.

The Thor's hammer is attainable on the third island, and is usually the first ability available to the monarch. On the island there will be two monuments: a cracked in half boulder, one side with green moss, the other with browning moss. This boulder will have an etching of norse runes which is the combination to unlock the second monument. The second monument is a statue of Thor with Mjolnir, with seven stone cylinders to his right. Each cylinder requires a coin to change the rune on it, and then five coins to activate Thor's statue. Putting in the correct combination will grant Mjolnir to the monarch, which costs one coin to pick up. Any runes that are incorrect will show up as red when activating the statue, meaning that the player could hypothetically force the combination if they wish to spend more coins.

Once attained, the monarch shall carry the mighty Mjolnir. When activated, the monarch will raise the hammer, and a thin targeting beam will appear somewhere on the screen, followed by several bolts of lightning. If Greed are on the screen, the lightning will track them so long as the effect lasts, and are powerful enough to one-shot even masked lesser-greedlings, and do major damage to other varieties. Should there be no greed on the screen, the lightning will strike randomly, with seemingly no effect on either the monarch and their subjects but will kill animals if they get hit by the lightning. The hammer takes approximately ten seconds to recharge. It is advisable that the monarch allow greed to bunch up against a wall before activating the Mjolnir for full effect, as greed on the move tend to sometime be capable of dodging the blasts should they move erratically.

Hel's Trophy can be attained on the fourth island. One of the easiest to attain, it is also one of the costliest. On the island the monarch will find a monument comprising four sconces and a bust of Hel; identifiable by her half-skull appearance. To activate her, each sconce must be given two coins, and the bust five coins. Four of your archers will then donate their weapons and shield (archers must have shields), and one of your knights/squires will donate their arms to the bust. Theirs arms may be returned to them via the usual means. Upon this donative being given, a trophy severed head will be granted, which can be attained by the monarch for one coin.

Once attained, the monarch will be able to summon a squad of viking raiders, led by a powerful viking berserker, and four raiding archers that will follow the monarch. They have a ghostly quality and appearance, and do not act in the same way that a regular knight-squire squad do. The berserker for instance attacks whatever is in front of it including portals aggressively rather than standing defensively in front of its archers and will not stop until defeated when, there are no more enemies, or their duration expires.

The horn of portals (or summoning horn, or horn of Heimdall) is located on the first island, but is unique amongst sacred stones for needing gems rather than coins. Three gems are required to activate the monument. The monument resembles two crying statues of Heimdall with his mouths wide open, with three pedestals to the sides and in between them. Each pedestal has an image of the sun's ascent and descent across the sky, and depending on the time of day, will have a beam of light over it. To activate the monument, the monarch must first unlock and mount Gulltoppr (Heimdall's horse) which exists on the first island along with the puzzle. Then, the monarch needs to offer one gem to the pedestal with the ray of light for each different time of day. The first may be given in the morning, the middle one in the afternoon, and the last one in the evening. Once done, the statues will cease crying, and Heimdall's horn will be available to the monarch for one coin.

The summoning horn acts as a form of mobile greed portal, but for the monarch's subjects and not the monarch. When activated, the monarch will blow on the horn, and summon a blue entrance portal, and upon a second activation, will blow the horn again to summon an orange exit portal. The portal allows for the monarch's subjects to enter the first portal and exit instantaneously out of the other one. Your subjects will only use portals if using it would mean getting to their target destination quicker. Example is when recruited citizens will take the portal if it would mean they get to the town center quicker, but not if the portal would have them farther then if they just ran. The horn can also be used to quicken the travel between the kingdom's wall and the cliff-side, but cannot be used to send the bomb squad back behind the walls again.

Be aware that greed can also use these portals. Portals left open for greed use may lead to waves hitting the kingdom quicker than anticipated. Care should be used to not make an exit portal too close to the mountain portal as bomb squads may be too close for the monarch to be able to pay the five coins necessary to advance the squad. The boar may also be teleported using these portals.

The Staff of Loki is located on the sixth and final island and is arguably the trickiest to unlock. The monument is identified by the stone statue of (presumably) Loki , with two stone serpents, each on the left and right side of the statue. To activate the monument, the monarch needs to drop their crown near the monument. This can be done by first emptying their pouch from any gems and carry only two to three coins. The monarch then need to lure a greedling (preferably during the noon where the number of greedling is managable) and purposely let the greed attack the monarch in such a way that the crown would drop towards the hands of Loki's monument. If done right, the monument will start to glow and the monarch should turn into a greedling and any subsequent greedlings will ignore the monarch. Pressing the ability button at this point will cause the monarch to return into their original form and also summons Loki's staff which costs one coin to take. You can also turn into any other type of greed (Hermit Crabs, Breeder, Crown Stealer, non masked Greedling) when the greed you want to turn into is highlighted blue. Doing this will allow you to use their attacks to hit your citizens or walls. This can be useful to change a job of a citizen or remove a wall you made by accident.

Using the staff to turn into a greed will make the greed treat the monarch as one of their own. However, the kingdom's citizen will treat the monarch's greed form as an enemy. They will try to attack the monarch while running behind the wall. Should your form run out of health, (example one hit for greedling or eight hits for crown stealer and so on), the illusion spell will be instantly dispelled. This can be useful to force the citizens to rally behind the wall (especially when trying to hunt the winter boar).