A statue is an ancient moss-covered abandoned shrine that reward the Kingdom with a specific blessing once the Monarch has made an offering of coin at them.

Statues are always found in the wood, but unlike vagrant camps, they will not despawn if the trees around them are cut down.

Activating the shrines changes their shape a bit, clears them from algae and mosses and adds visual cues on the blessed objects.

Kingdom: Classic – Two types of statues will always be found on each land; usually one on each side of the Kingdom. The blessings received are temporary, lasting for one to three days, according to how much gold was offered. As the buff is consumed, the lights on the pillars next to the statue will slowly dim and fade. All statues are available from the beginning.

Kingdom: New Lands – There are four types of statues, each one unlocked on a specific island. After a statue has been unlocked, it can be found on any future island, except on the fifth, that has no statue at all, and the Skull Island, that has some restrictions and features its own statue. The blessings have the same duration as in Classic.

Kingdom Two Crowns – Each type of statue is tied to an island (for example, the Statue of Archery will always be found on the first island). Statues are unlocked with gems and activated with coins. Once activated, the blessing remains for all islands on that campaign until the Monarch loses the Crown (or the Crowns in co-op), after which only the offering of coins will be required to reactivate statues.

The Statue of Archery is an archer statue which increases the accuracy of all archers of the Kingdom for as long as the shrine is active. Note that the shrine does not increase the single damage of archers' attacks, but only their chance to hit the target.

When active, the buff will illuminate the archers' arrows, while a cluster of arrows will create a laser-like projectile if fired synchronously from the same direction.

A bow and arrow will appear on an activated Statue of Archery.

Increases the hit points of walls

The Statue of Building is a builder statue which increases the maximum hit points of all defensive fortifications. The added hit points remain after the shrine becomes inactive but reactivation is needed to restore them after the wall takes damage. The bonus applies to all walls standing and walls constructed while the buff is active, even walls that were destroyed after the buff was last activated.

A six-coin offering in Classic and an eight-coin offering in New Lands gives or extends the duration of the buff by a day, for a maximum duration of three days if twenty-four coins are paid all at once. Activating the buff will make the walls glisten. Despite being associated with builders, the buff does not make builders more or less efficient. However, builders will need to repair/upgrade the existing walls first in order for the buff to take effect on those walls.

A hammer will appear on an activated Statue of Building.

Increases the yield of harvests

The Statue of Scythe or Statue of Sithe[1] is a farmer statue which increases the supported crop fields cap number of each farm type by two fields.

This means a water well farm can have six plots instead of only four, and a mill house can have eight instead of six. Barns in Two Crowns also gain the ability to support two plots of land, so farmers can hence work at a barn.

A four-coin offering in New Lands is enough to allow for one day of increased yields, whereas twelve coins all at once will allow the effect to persist for three days straight. In Two Crowns it is unlocked with one gem and activated upon a seven-coin offering.

A scythe will appear on an activated Statue of Scythe.

The Statue of Knight is BROKEN in Two Crowns.
Monarchs should not activate it. See the details below.

The Statue of Knight is BROKEN in Two Crowns. Monarchs should not activate it. See the details below.

The Statue of Knights is a knight statue which gives the knights a special leaping attack, capable of killing multiple greedlings at once. Each time they charge, they apply 1 damage to all the Greed they've pierced through. The attack then is brutal to groups of regular greedlings, less effective against the masked ones and worthless if used upon a breeder.

Knights become invulnerable during the jump and resume their standard behavior when not jumping. The one or two seconds between the leaping attacks is a critical moment during which they can be hit. The warhorse special ability seals them with invulnerability even during these two seconds, making a great combo with the Statue of Knights' blessing.

Knights will perform the special attack whenever they see a Greed, no matter the time, the place or the amount of Greed gathering before them. This makes the ability only really useful when attacking portals, as the incoming greedlings will frequently die even before charging once against the troops.

However, if the statue is still active during a nightly wave, or, even worse, a Blood Moon wave, the knights will probably lose their coins, weapons and shields while jumping outside the walls.

Oh dear brave knight,
Who ventures into the wilds
Please draw your sword
And fight away the Greed!

Kingdom: New Lands – An eight-coin offering provides the ability for a full day (good before attacking a portal), with twenty-four coins at once extending the ability for three days straight (not recommended).

Kingdom Two Crowns – As all other statues, once activated, the effect remains until the Monarch loses the Crown, in this case exposing knights to an unnecessary risk in the mid-campaign, and to their pure doom when defending the walls in late-campaign. Activating the Statue of Knights in Two Crowns is a curse for the warriors and may be the cause of the ruin of many unaware Kingdoms.

Legend
Legend has it that knights whose Monarch has offered coins to the Statue of Knights, gather during the day outside the wall to talk about how wonderful would be if their ruler loses his Crown, so much sorrow they hold for their fate.

A shield will appear on an activated Statue of Knights.

Freezes the falling sand by 1 day, delaying the defeat originally planned for the 50th day.

The Hourglass Statue is a statue of a person holding a giant hourglass in a position similar to the mythological Greek titan Atlas[3]. This statue is only present in the Skull Island (New Lands) and its purpose is to add a new defeat condition to the island: if all the sand is poured out, the monarch loses instantly. If no coins are given to the statue, the sand will have shed completely by the fiftieth day. And each time a sum of eight coins are donated, the sand freezes and stops falling for one day.

Unlike the other four statues, the hourglass does not accept extra charges that would extend its effect for a larger period of time. So, unless the monarch keeps waiting at the statue's feet for the effect to finish, and then remakes their offering, a considerable amount of sand will always fall between charges, meaning the defeat hour approaches.

Although this applies real pressure for most casual players, it's very possible to finish the sixth island challenge far before the fiftieth day, meaning the donation to this statue could be completely negligible.

Visual cues indicate that a specific statue is active. 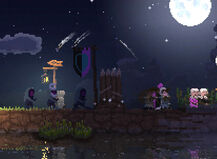 The archer's buff: arrows have a trailing effect. 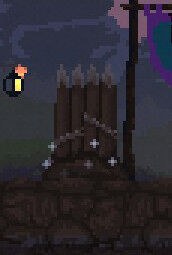 The builder's buff: walls have a sparkling effect. 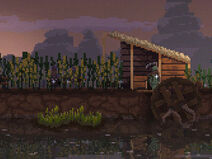 The farmer's buff: crops have a sparkling effect. 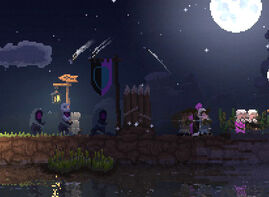 The archer's buff: arrows have a trailing effect.

The builder's buff: walls have a sparkling effect. 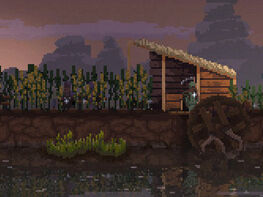 The farmer's buff: crops have a sparkling effect.

Retrieved from "https://kingdomthegame.fandom.com/wiki/Statues?oldid=18471"
Community content is available under CC-BY-SA unless otherwise noted.