The Statue of Archery is an archer statue that increases the accuracy of all archers of the Kingdom for as long as the shrine is active.

The archery blessing does not increase the single damage of archers' attacks, but their chance to hit the target, making them overall much faster while hunting wildlife and killing Greed.

A five-coin offering in Classic and four-coin offering in New Lands gives or extends the buff provided by a single day, up to a maximum of three days. In Two Crowns it is unlocked with three gems and permanently activated upon a ten-coin offering.

A bow and arrow will appear on an activated Statue of Archery. 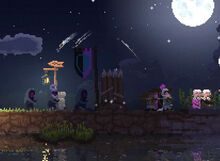 When active, the buff will illuminate the archers' arrows, while a cluster of arrows will create a laser-like projectile if fired synchronously from the same direction.

In Norse Lands, the statue has a different appearance.