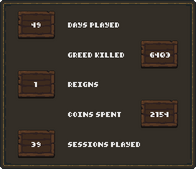 Stats board is part of a cutscene triggered when the cave on one of the five islands of the campaign is destroyed. It's a brown panel that shows the stats for the Kingdom on that island.

The full cutscene includes the following sequence of events:

This sequence is triggered no matter if the Monarch(s) manage(s) to make out of the cave before the explosion or not. If not, one last glorious quote reads: “No Crown, No King/Queen.”

All the stats shown in the board are the numbers for the Kingdom on that specific island only, counting all the times the Monarch and their heirs, if any, have landed there. The only exception is "Reigns" that's related to the entire campaign. The stats are the following:

The logs appear one after the other in a plain and calm animation that lasts for fifty seconds, during which everything freezes, including the Monarch.