The stag[1] is a mount found in the forest near two stone lanterns with a very small waterfall in between them.

Kingdom: New Lands – This mount is unlocked with a signpost on the third island, after which it can be found on any island.

Kingdom Two Crowns – It's always on the second island and costs one gem to unlock and three coins to ride it. The stag is slow inside the cave.

It walks slowly, but it gallops very fast when inside the forest, while its gallop speed is comparable to the black horse on open land. It normally has slightly more stamina than the original horse, but less so on open terrain. It can graze on grass to recover stamina, but is slightly slower than the horse on developed land.

The stag is also able to make deer follow it. By walking near a deer it will cause an attraction harp sound to play. Afterward, small love hearts will appear above the normal deer along with a notification sound and the deer will begin following. The deer don't gain speed, so they cannot keep up with stag.

Kingdom: New Lands – During Christmas, Monarchs may find a mount very similar to the stag, the reindeer. For further details, see: Reindeer. 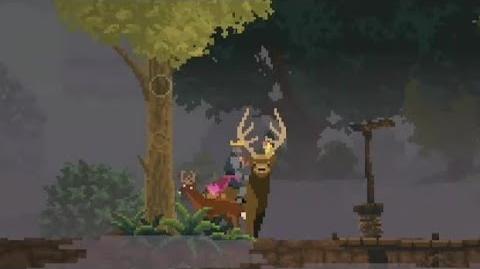