Shogun[1] is a variant of the regular campaign in Kingdom Two Crowns. It is mostly a cosmetic variation or "biome" inspired by the landscape, architecture, and culture of feudal Japan, with very few mechanical differences from the original Europe setting. This environment becomes accessible with a free DLC. 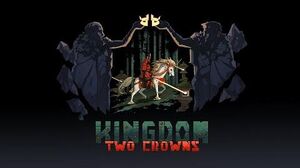 Play as the mighty Shogun or Onna-bugeisha, enlist the support of the ninjas, lead your soldiers to battle atop the mythological Kirin, and form new strategies as you brave the Greed hiding in the thick bamboo forests.Teaser on Steam Store

Kingdom Two Crowns will be expanded with post-release updates that will venture to exotic biomes across the world. On day one of release, players can journey to Shogun, the first biome available. The feeling of exploration, discovery, and strategy is kept alive in the new title of the series through themed biomes, each with unique styles and features that marvel the eye, while changing how the Monarch rules the land, providing a new playstyle for players who have finished the game.

Ninjas replace pikemen. In the past ninjas did not produce currency however in the most recent patch you can find them around the castle with fishing rod in hand, behaving much like pikemen. They also go into the forest to fight instead of sitting behind walls.

The bamboo forests are much denser than the normal forests. This means that clearing takes longer, but gives more coins.

There are many visual changes, including the Monarch, blazons, subjects and mounts. It gives the game a new look while staying true to the original feeling. Masked greedlings also look slightly different with their masks looking like the faces of Oni demons from Japanese legend. Squires and knights are replaced by Ronin and Samurais. Instead of swords, they wield katanas. 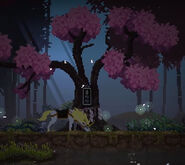