The purse or pouch, sometimes called coin purse for more clarity,[1] is where Monarchs keep their coins, and (in Kingdom Two Crowns) their gems.

The pouch fills up as the Monarch picks up coins or gems and empties when they are dropped, showing the Monarch's precise coin and gem count at all times. A monarch releases gems only after all the coins in the pouch have been dropped.

At the start of their reign the Monarch has an empty pouch, while in Kingdom: New Lands and Kingdom Two Crowns they bring with them the coins they had when leaving the previous island.

The coin pouch can comfortably hold up to about forty coins, becoming "full". However, it is possible to overfill the pouch, making the capacity effectively about fifty coins. Coins picked up while overfilling are increasingly likely to slip off the overflowing pile, falling onto the ground or into the river irretrievably.

Gems hold more space than coins, and so holding many gems significantly reduces the pouch capacity. After you find him it is best that you give all your gems to the Gem Keeper, it may be a good idea to leave gem chests unopened until they are needed. It is also possible sometimes for gems to form barriers that prevent coins from reaching the bottom of the pouch although this can easily be remedied by reshuffling the pouch by emptying it.

A monarch with an overflowing pouch has a number of options to consider:

Bug – There is a bug in Kingdom Two Crowns where a coin that has just been picked up by the Monarch will fall directly into the river, even if the purse is very far from overflowing, more specificaly when the purse is visibly less than half full.[2][3][4][5][6][7]

It looks like a bug, because the coin does not bounces on the top of the bag, as it usually happens when the purse is almost full. The glitched coin just goes down in a vertical fall without hitting anything.

As having very few coins is more common during winter, some players would have the impression that the glitch is related to that season, but it can happen on any season. The community have started reporting this more after the Conquest Update (November 2021), but it used to happen before that, maybe less frequently. It seems to have started as of the Never Alone update (April 2021).

Colors of coins and gems[]

Coins and gems inside the pouch can be different colors, but they all function as normal coins and gems when removed.

Coins can be bronze, silver, and gold, while gems can be blue, green, and red.

These are the achievements directly related to the pouch: 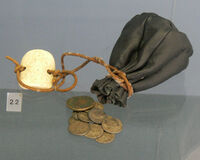