Plain is the walkable area with no trees on it, and where, under certain circunstances, grass can grow. Along with forests, plains form the totality of the natural environment in Kingdom.

Plains are the common place used for the expansion of the Kingdom, where most of its structures are built. They may exist inside or outside the Kingdom borders.

Kingdom Two Crowns – Due to several important differences, the space inside the cave is not considered a plain.

Upon arriving on a new land, the Monarch will find it almost fully occupied by forests, which generally obstruct the expansion of the Kingdom. Plains represent at this stage only a small percentage of the land. Below, these initial plains are classified according to their locations and the way they're used by the Monarch.

The central plain is the big open space roughly located at the middle of the land. It has the unlit campfire, from where most Kingdoms start their expansion process. It's by far the largest strech of initial plain.

Clearings are all the other open spaces found between two extents of forest. The trees around them are far enough to allow for the growth of at least a tiny patch of grass. Larger clearings only occur if they're the habitat of some typical mounts. Clearings are mostly used on expasion strategies where deforesting is done past a wooland containing a vagrant camp and/or a Merchant settlement, so those structures can be preserved.

In Two Crowns some islands are generated with no clearings in one of the sides of the Kingdom. 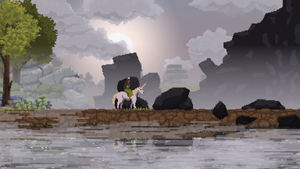 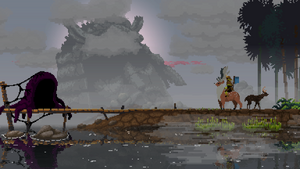 All lands are surrounded by two cliffs, or by a cliff and a beach. In New Lands and in Two Crowns, cliffs are notable for their cliff portals, and beaches, for the docks—in Two Crowns also for the dock portals. Just before each cliff and each beach, there is always a small plain with a tiny patch of grass.

When scouting the land on early stages, the extremity plains are remarkably useful for grazing, especially if there is no clearing in the way from the town, or if the mount wasn't allowed to graze in the clearings. On extremity plains, if the grass patch is too close to an active portal, there's a risk of being considered a threat by the portal, which could meanwhile release one or two greedlings. Due to the distance from the Kingdom borders, the risk is usually worth taking, unless the Monarch has no coins to pay off the incoming monsters.

Kingdom Two Crowns – The extremity plains may lack grass, even outside the winter. It's unknown if this is caused by the cycling seasons, the land layout generation, or a bug. This occasional absence becomes irrelevant when riding a griffin, which can restore its stamina anywhere.

Monarchs can expand a plain by cutting the trees around it. After the edge of a forest is felled, it is slowly replaced by plains biome. The buffer of fellable trees moves inwards, and the Kingdom is allowed to expand. Boulders, streams, and dirt mounds can only be constructed upon in the plains.

If there's a clearing in a forest, it can be widened enough for walls & towers to be built there, effectively including some forest within a kingdom.

Structures occurring naturally in a plain include:

The table below shows the few mounts that have their original habitats in the plains:

The horse or another mount can start grazing on grass (eating it) to regain its lost stamina, as well as receiving further benefits.

Kingdom Two Crowns – Opening the menu before this time makes the grazing in course ineffective. The animation is completed after unpausing, but, unlike the previous game, the mount remains tired, requiring an extra animation cycle.

A mount's stamina is fully restored as soon as it is done grazing. In addition, the grazing temporarily largely increases stamina. The effect is represented by a white trail left behind by the mount's feet as it runs. The effect lasts for forty-five seconds for the original horse (replacing its normal sprint duration of fifteen seconds), while other mounts are affected according to their own stamina. For example, the bear receives about twelve seconds of stamina that helps with both running and recovering from attacks. The effect depletes over time regardless of running, walking, or standing still.