Norse Lands is a setting and a campaign inspired by the Norse Viking culture.[1] Just like the other settings, Norse Lands has its own heavily reskinned aesthetics. But unlike the others, it features a considerable amount of new gameplay mechanics, noticeably more than those brought with Dead Lands.

The Viking setting was introduced as a fourth optional campaign.[2] Its logo appears on the left of the European campaign logo.

Similar to Dead Lands setting (first released as a campaign, and later used as the world of Trade Routes), the Norse culture is expected to appear on at least one future Challenge Island, but that has not been mentioned by the developers yet. 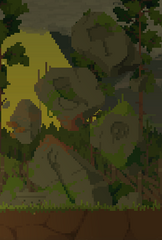 The Stones of Power[4]

There is a great amount of cosmetic differences, meaning in-game elements that function just like in the other settings, but that have their own unique appearance in Norse Lands. For example:

The six monuments (for the six islands) seen on Norse Lands

Viking King in a nordic forest

The village tents (and two mounts)

Auto recruiting at the brewery

The Norse Lands DLC is available as a premium content for all Two Crowns owners on the following platforms:

It requires the base game Kingdom Two Crowns.

Other than visiting the online store page for the DLC, users may purchase it through the links provided in-game. The links can be found on the following places:

Steam – If the user accquired the DLC, but has disabled it in the Steam library game otpions, the same in-game purchase options will appear.

Google Play Store – Norse Lands on app stores do not have a specific showcase page for its content. The premium DLC is available for mobile only as an in-app purchase after owning and loading the base game. The purchase links are similar to the ones listed above.

If you want to play online with someone, you own Norse Lands, (...) and they don't own it, as long as the host owns Norse Lands, you can invite them to play an online session with you. So not everybody has to own it. [That goes for all platforms?] All platforms that have online play, yeah.Developer Gordon[5] 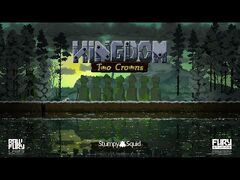 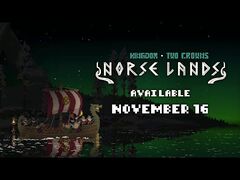 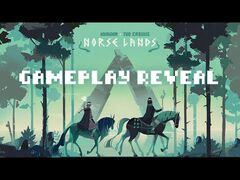 On 21 October 2021 a demo of the Norse Lands campaign was made available for free for Windows users on Steam.[6][7] The demo version tried to mimic a full campaign in one modded island full of random unlockables, and with no boat. After destroying the cave there, the player was prompted with the options to buy the game or restart the demo. On 12 November 2021, it was made available also for Mac and Linux users.[8]

Four days later, on 16 November 2021, the demo was removed from the store,[9] and the full version of Norse Lands was released as a premium DLC, along with the "Conquest Update", that brought several changes to all settings.[10][11][12]