in Classic and New Lands

Only applies damage if
riding a bear, a lizard or a wolf

The Monarch is the playable character in the Kingdom series. The Monarch runs the Kingdom by traversing it upon their mount, and organising the work of their subjects, using coins with the power of the Crown.

Two Crowns co-op – There is no way to customize the appearance of the second player. They will just get their characteristics randomized when they join the campaign for the first time.

For how to control the Monarch, see: Controls § Game controls.

While in most real-time strategy games players have a godlike view of the battlefield, with zoom out features and minimaps through which they can spam commands at the rate of their actions per minute, players in Kingdom have to manage their subjects by embodying the Ruler on the ground with their physical, spatial, and temporal limitations.

In the Kingdom series, when players start a new run, the quote appearing in the introduction scene suggests that there's some sort of liaison between the Monarch that lost the Crown and the newcomer. Based on real life historical references, they could have the same royal blood, following a vertical inheritance, but there's not enough in-game clues to assert that. They could be:

In Kingdom: Classic the concept of clan isn't too clear, seeing that, as stated in the very first quote of the introduction scene, monarchs are "solitary". In New Lands the idea of succession incorporates significant hints with the introduction of the Ghost and the warhorse battlefield scene. In Two Crowns the existence of cooperative couples (being considered engaged or not), associated with the persistent islands, make the thought of a common kinship more plausible.

According to the introduction scene, the first Ruler of the Dynasty is "carrying the crown to a new land". This character is commonly controled by someone who is playing Kingdom for the first time. They have almost no knowledge of the land and its dangers. With or without the initial tutorial, they will inevitably make a lot of mistakes that cannot be canceled. No extra lives and checkpoints to reload.

The knowledge however is transmited to the next generations of Monarchs, by the player. The introduction scene says that the descendants "will do better". In Two Crowns the Ghost approaches them and proclaim the following enthusiastic compliment: 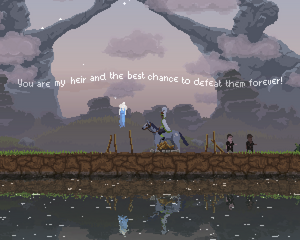 You are my heir and the best chance to defeat them forever!

...Which finally makes fully explicit the concept of succession between the Monarchs, and seals the overall goal they have in common.

Through the succession of monarchs, players experience that Dynasties aren't made of a single Ruler. They also understand that the most rich and beautiful Kingdoms are necessarily built over the failures of their ancestors. That none of the were or will be perfect; and none were expected to be. But they all may take advantage and honor the knowledge acquired and excelled throughout their many generations.

Losing the Crown and continuing the same campaign with a Successor grants the "A New Heir" achievement.

For the technical details of the multiplayer mode in Kingdom Two Crowns, see: Co-op.

The Norse Lands setting is expected to have three different Monarchs with special mechanics and abilities.