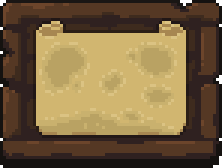 The map is a navigational instrument made of paper, and containing the symbolic depiction of the islands and their main features.[1]

Kingdom: New Lands – The map is similar, but less complex, containing much less information. It reveals all five islands, and the Skull Island in one single chart. It also displays the icon of the features unlocked after purchasing a signpost. The wiki does not have a dedicated article for the map in New Lands, but users can follow the links provided in this paragraph to better understand the feature.

The map can be accessed through the pause menu, which means that opening it will forcibly interrupt the day-night cycle.

Besides that, the map is only available when playing a campaign (on any setting), that is, there's no map on Challenge Islands.

In addition, the map is automatically shown when departing from an island on board the ship. In that case, the map can only be dismissed after having chosen the next destination.

The main functions of the map are:

Determining the current location of the Monarch is a mental process—often unconsciously performed—that is crucial for making the right decisions throughout the campaign. This process encompasses locating the Monarch:

Most players will only realize the importance of this intel task when they come back to a campaign after a long period away from the game. In those cases, the whole action can be so demanding, that many players prefer to simply restart the campaign from scratch.

When accessed, the map is always displayed as a "You-Are-Here" map in a wayfinding system.[2][3] It indicates the island the Monarch is currently on, by showing the chart of that island whenever the map is opened. In New Lands this is done with a big arrow over the island. As in Two Crowns the multi islands map was replaced by the group of charts each containing only one island, the big arrow was no longer needed.

The chart of the current island can also be distinguished by the presence of the boat icon, either in its shipwrecked or repaired form.

While campaign lands are unofficially called by their respective ordinal numerals, they actually have no in game name. Therefore, the charts on the map are not enumerated, and finding out which island a certain chart is showing, frequently requires sliding all the way to the first chart, and sliding back counting. Otherwise, players can instantly identify the selected island if they have memorized the order of unlockables along with their icons.

Unlike most strategy games, the map in Kingdom cannot tell the Monarch's exact or relative location across the island. It cannot inform, for example, if the Monarch is on the left or right side of the campfire. It has no integrated radar, nor any kind of GPS tracker.

Spatial orientation with no map

Other primitive techniques would have to be employed, if the Monarch is "lost" in the wilderness. The Ruler would have to run all the way to one random direction until they reach a portal, a boulder pile, a wall, or the campfire itself. It's possible to find out the direction of the town by observing the side towards which these structures are positioned. If the Monarch has a coin, vagrant camps can also be used in the orientation process: vagrants with a coin are never lost.

These techniques of spatial orientation are often required at the beginning of the Skull Island challenge.

In campaigns, it's possible to recognize the current island by observing the far background monuments. In Shogun, for example, the arch bridges monument typically identify the fourth land. Of course, this primitive orientation method requires good memory by the player, and good in game weather, both of which are not always available.

The map provides a way to select the next destination when traveling between the unlocked islands. For the details on how to do it, see: Controls § Traveling.

The map is used to track the progress of the Kingdom throughout the levels of the campaign, and to orderly display that advancement, highlighting the main unlocked features and milestones.

The map originally incites a sense of weakness and incompleteness by revealing only the silhouette of locked items, and by hiding undiscovered islands under a dense, mysterious cloud. As the Monarch explores the lands and expands their possessions, the map should inspire confidence, which can lead to success or not. The fulfillment of that progress objectively happens when the last cave goes down, and it’s perceptibly sealed when looking at the save slots with all their unlocked items slowly sliding left and right, under the Dynasty’s coat of arms.

The map interface is basically composed by the collection of charts, and a right column. Players can switch between the available charts by using the left and right arrow buttons or keys. The charts have the depiction of the lands in the middle, and a couple of icons grouped in a left column.

Center of the map[]

Icons that may appear inthe central part of the map.

Icons that may appear inthe left part of the map.

On the left hand side of the map are some indicators and counters. Their symbols and meanings are listed below as they appear from top to bottom:

On the right of the map is a timeline of the Monarch's predecessors. If the Monarch never loses the Crown, they are the only one shown, otherwise the past monarchs are shown too, along with how many days they reigned and how they were defeated (to a greedling, to a crown stealer, or in a cave explosion). If a past monarch is selected using the vertical arrow buttons, the state of the world at the end of their reign is shown on the map.