Kingdom: Two Crowns is the third and most recent installment in the Kingdom series.

New features have been included in the game, such as a new win scenario, an additional tech level, new citizen roles, local split-screen and online co-op that allows a second player to drop in and out of any game, a new soundtrack, completely overhauled visuals, and new skins for rulers.

The first and most obvious benefit to co-op is that twice as much territory can be explored in a day if one person goes left and the other heads to the right. Coinage can also be shared, so if one player is short on building a guard tower or wall, it’s easy to throw some change their way. Another big bonus is that if one player has their crown stolen the game doesn’t end. The crownless player can’t build anything, but they can still gather gold coins and hand them off to the remaining ruler. A new crown may be crafted, and the other player may fully rejoin the game.

Since we're two players, if the Greed take my crown, for example, then you could come and help me by crafting a new crown for me, but while I'm crownless I can't really do anything; I can just collect money and give it to you, basically. So we need to stick together in that regard.Liam O'Neill in Gamereactor's interview (3′15″). 16 May 2018.

The Pikeman to solve the Greed bunching up the walls.

Monarchs are able to customize their garment.

Fire catapults for the "Iron Age".

Forge, a station for the "Iron Age".

Ninjas, an exclusive unit in the Shogun biome. 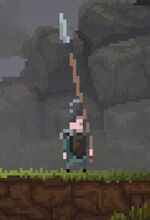 "These units were created to stop the problem of too many Greed bunching up against the wall."

The pikemen in action.

Pikemen and the fire catapult.

You can fight with fire.

It's the Shogun version of the warhorse.

The dojo is a building exclusive to the Shogun biome.

The Shogun version of the boat.

You can have multiple saves.

Two Crowns was released on 11 December 2018 for PC, Nintendo Switch, Xbox One and PlayStation 4.

The project was originally intended to be an expansion of Kingdom: New Lands and had been announced to be released in 2017, but it has grown into a full standalone game and the release date was postponed to 2018.

...It won’t be coming out this year like we had originally intended. (...) The vision grew larger than our original scope, to the point that this is no longer just an expansion that adds new content but rather a full-fledged new title.Raw Fury on Steam news. 30 August 2017.

Retrieved from "https://kingdomthegame.fandom.com/wiki/Kingdom:_Two_Crowns?oldid=14119"
Community content is available under CC-BY-SA unless otherwise noted.