Kingdom: New Lands is a "sequel" to Kingdom that was developed by Noio and published by Raw Fury. The game was released for the PC Platform "Steam" on August 9th, 2016, and the original game was renamed from Kingdom to Kingdom: Classic.

Kingdom: New Lands is available on several platforms: Android, IOS, Linux, Nintendo Switch, PC, Playstation, and Xbox. The game was nominated for the SXSW Gamer's Voice Awards, and has won the award for "Best of Show" in the 2015 Indie Arena Booth.

Tales spread of far off isles with mysteries waiting to be discovered. Rulers will need all the strength of their subjects to sail away and find new kingdoms in these New Lands.

Kingdom: New Lands builds upon the award-winning gameplay and mystery of Kingdom by introducing an abundance of new content to the IGF-nominated title while maintaining the simplicity and depth that legions of monarchs have come to experience and enjoy. Travel to the New Lands and welcome the deluge of new mounts, merchants, and vagrants that call these isles home, but be wary of the new obstacles that threaten your arrival—for not just the greedy creatures block your way but even the environment itself can defeat you.

Kingdom: New Lands asks you to puzzle things out on your own. You'll come across items, NPCs, and mysterious statues to help you but you'll have to figure out just how exactly they'll aide you in building and defending your Kingdom.

Kingdom: New Lands is about exploration, discovery, survival and that awesome feeling that you get, when you figure something out, on your own. When multiple pieces all of a sudden come together to form a whole – a basis for a new strategy or an understanding how something in the world of Kingdom: New Lands truly works.

It is about tenacity and overcoming obstacles – even when they seem to be unsurmountable. Pulling through, against all odds. Rebuilding and recovering. And that huge internal high-five when you succeed.

It is about figuring out how best to manage your little Kingdom and tie everything together in a fashion where the game doesn’t play you – you play the game.

It’s also beautiful, tranquil, melancholy, frantic, stressful and wonderful. It delivers a spectrum of emotions that combine into a unique experience.

It's a minimalist strategy game where you need to discover the rules of how the world behaves before you can rule effectively. It's also a little bit whimsical, it's pretty, and it can be frustrating but it won't hold your hand.

New Lands is similar to the original game in terms of a monarch trying to establish a long-lasting kingdom while being attacked by otherworldly monsters. However, the Monarch begins shipwrecked on an island, and has the goal of sailing away to a different island before getting overrun. Further flavors are added to the gameplay, as listed below in "New Features".

It is suggested by the many surrounding ruins that this is not the first Monarch to settle on the islands. The presence of helpful ghosts and other characters suggests that the collective efforts of people on the islands to survive and thrive have been ongoing for many years.

New Lands major addition to the series is the level design, in which, instead of having only one world/level to build upon, there are six different islands, each island being more difficult than the last. The reconstruction of the boat hinders the access to the next island—destroying portals is no longer the main objective of the campaign.

To help with this increasing difficulty level, each island has a pack of unique unlockables (including new mounts and special structures), that would make later islands much easier. And to press the Monarch on moving to a next island, there are seasons, with the harsh and endless winter, when almost all economic activities of the Kingdom would cease.

Note: Below is a comprehensive list of the new features in Kingdom: New Lands.
All the Kingdom: Classic features that continue to be available in New Lands are not listed here. 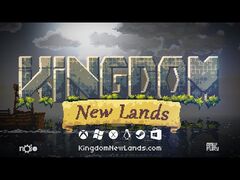 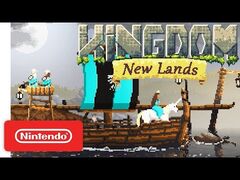 On which platform do you play Kingdom: New Lands?
Go HERE to vote.