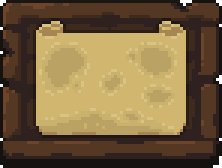 Islands in Dead Lands, the third optional campaign of Kingdom Two Crowns, are pieces of land surrounded by a river, a sea and a mountain, where Monarchs establish permanent bases to survive the Greed, generate an economy and destroy the cave in the mountain. Monarchs can move between these islands with the boat and will occasionally have to revisit the same islands a couple of times in order to reach their goal.

In order not to wreck the ship each time, it may be a good idea to clear the dock portal and build a lighthouse first, before leaving an island.

While Monarchs are away from an island, the buildings there start to decay. The longer they are away, the more gets destroyed or downgraded.

There are five islands in total, and only the first one is available upon starting the campaign. Repairing the boat and setting sail unlocks the next island in sequence (see map). Moving to a new island does not reset the overall day count nor the seasons cycle, but each island has its own local day count, which is displayed, when the bell rings in the morning.

All islands have similar geography, but each successive island gets progressively larger and harder, affecting the number of towers, walls and farms that can exist in the Kingdom. On every island (except the first one) the Monarch can encounter gems to unlock new mounts, statues and hermits that can help them on their journey. The structures and developments in different islands can be tracked using the map in the pause screen.

There are no small portals on this island.

There is only one small portal on each side of the town.

There are two small portals on each side of the town.

There are three small portals on each side of the town.

There are three small portals on each side of the town.

The current speedrun world records held on Dead Lands are as follows: [1]

This section is about the logs related to the islands in the Dead Lands settings only..
For the changelog affecting all campaigns in general, including those related to the medieval and japanese settings, see: Islands (Two Crowns) § History.