A hermit is a reclusive small individual living in an old cottage deep in the forest who can be coaxed to upgrade a specific kind of Kingdom structure, frequently granting it a completely new function. Their appearance, unlocking conditions, and the structure they can interact with depend on their type.

Kingdom: New Lands – The Monarch has first to unlock the hermit on a certain island (see below) by using the signpost. Afterwards, a random unlocked hermit can be coaxed outside of their cottage, by paying four coins.

Kingdom Two Crowns – Various amounts of gems and coins are required to coax hermits. Each hermit has their own cottage and can only be found on a certain island (see below). Unlocking using gems has only to be done once, whereas hiring with coins can be repeated, if the hermit gets kidnapped.

The hermits will slowly wander their way towards the town center and choose a spot to idle. Paying one coin directly to the hermit allows them to ride alongside the Monarch on his or her mount. Once they're taken back to town, the hermit enables the option to reconstruct a building into a special structure, dependent on which hermit type they are. 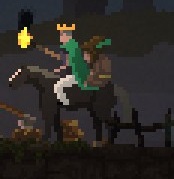 The hermit must be riding alongside you in order to upgrade a building. They will jump off your mount if you go outside the borders of your kingdom at night, so be careful. You just have to pay one coin to have them ride alongside you again, but if you go in the wrong direction they will jump off again. They can also be taken to the next island, if you have them on the back of your mount when you sail with the boat. In Kingdom Two Crowns you don't need to have them with you in order to carry them to the other islands: all hermits alive on the island will come with you upon departure.

When a tower is upgraded with a hermit, the archers are released and return to their normal role of archers, hunting during the day and guarding the outer wall during the night. So, other than giving to towers a special ability, the Monarch may want upgrade them for the simple purpose of releasing these archers; either because of economic needs (if the number of archers hunting is insufficient), or because the outer wall has advanced and these towers have little use as defensive structures.

Kingdom Two Crowns – A monarch can manually dismount a hermit, by flipping back and forth rapidly. 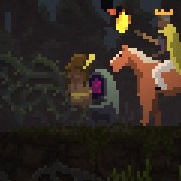 The hermit can be captured by the Greed to be taken back through their portals. If a hermit is taken they do not appear on that island again. However, killing or stunning the greedling that has captured the hermit will free them.

Kingdom Two Crowns – Kidnapped hermits will be inaccessible and cannot be recruited again from their cottage - instead, they can now be rescued. The most honorable way to regain access to a hermit is to use a bomb and destroy the cave on the island which the hermit has been kidnapped. If the Monarch survives the assault, the lost hermit will be waiting outside the cave, along with any gems and the dog, if these were also been taken by the Greed on that island. If desperate however, simply lose the Crown. The kidnapped hermit is then lost for good, and a new one can now be recruited at his respective cottage by repaying the coin cost.

There are five unique hermit types: the Ballista Hermit, the Bakery Hermit, the Knight Hermit, the Signal Hermit and the Stable Hermit. Some colors of the Hermits' cloths depend on the Monarch's own colors.

Bakery and Ballista Hermits next to a ballista tower
Cropped.png
Vagrant eating bread from a Bakery

Horn Hermit in front of his cottage

Bakery and Ballista Hermits next to a ballista tower
Cropped.png
Vagrant eating bread from a Bakery

Horn Hermit in front of his cottage
Retrieved from "https://kingdomthegame.fandom.com/wiki/Hermits?oldid=18108"
Community content is available under CC-BY-SA unless otherwise noted.