The golem is a defensive mount exclusive to the Dead Lands campaign, that can summon root barriers.

It is found on the third island—replacing the warhorse from the regular settings—and it's unlocked with two gems and twelve coins.

The golem has low stamina and speed. It can graze at any time, by growing small yellow flowers on its forepaw and eating them. This can only be done on plains.

The golem's ability can only be used while not moving. When it is used the golem creates an immobile root barrier similar to a wall that is able to slow down and push back the Greed.

To activate the ability the player needs to stand still facing the desired side and press down the Shift button on the keyboard or RT on the controller. This will cause the golem to be immobile for half a second while a barrier is being summoned.

Only three barriers can be active at a time. Activating the golem's ability with three barriers already present removes the oldest one and creates a new where the ability was activated.

Using the golem's ability combined with the Alfred's decoy, creates two barriers at once, but without changing their cap number. Activating the ability with a monarch's decoy and with three barriers already on the field, would make the two oldest roots fall immediately, replacing them with the new pair at the new location.

Each barrier can withstand about two thirds of the maximum damage taken by a wood spike wall. Which means it can resist a few greedling attacks before it is destroyed. 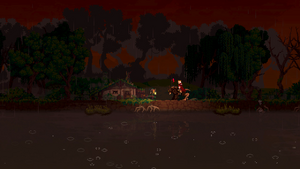 The golem's ability to summon root barriers may be useful: