This is about Kingdom Two Crowns.
For the character storing coins, see: Banker.

The Gem Keeper[1] is a merchant banker who stores gems. Like the Merchant and the Banker, he is a neutral character, who can not be attacked by the Greed.

The Gem Keeper stores the gems in a stone coffer for the price of one coin each gem, to be paid at the withdrawals.

One stone coffer is always found by the central wharf of each island when the town center has been upgraded to castle keep. The shady merchant banker though only appears if the Monarch has entrusted at least one gem at the coffer.

If the coffer is not yet protected by walls, the Gem Keeper will act just like the Banker, hiding during nightime. But if the Kingdom has expanded enough incorporating the central wharf he will be available at any time.

There is no way to query how many gems have been hoarded without withdrawing them all and depositing them back into the coffer. 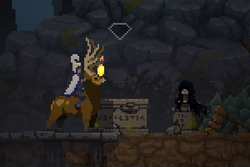 The gem bank is useful to: