Gems[1] are a secondary currency, used to unlock mounts, hermits, and statues.

To acquire gems, Monarchs must find and open gem chests. The total amount of gems in chests is equal to the amount required for all the unlockables.[2]

Just like coins, gems are collected and stored in the Monarch's purse.

If Monarchs intentionally drop their belongings, coins are prioritised, and then, if there are no more coins on the purse, gems will drop.

Unlike coins, which vanish with time, gems will never disappear if they are dropped on the ground. Also, subjects won't collect them. Only greedlings can take them away.[3]

It doesn't matter if the Monarch travels away, or loses the Crown, the gem will be there until being recovered by a Monarch, or stolen by a greedling. No amount of decay can make a gem disappear either.

Gems spat out of the cave with the bomb detonation are guaranteed to be somewhere near the cliff, as greedlings can no longer appear on that island to grab them. However, next Heirs will have to spend some gold and a couple of days to visit that island, if they want to retrieve the dropped gems.

When Monarchs are hit, either by a greedling, a breeder, or a boar, coins are prioritised as well. When no more coins are left on the bag, gems become the target, and then, the Crown.

Crown stealers ignore gems just as they ignore coins: their first target is always the Crown.

Greedlings are the only monsters able to steal gems left on the ground.

Gems stolen by them on an island can be recovered after the cave (not the cliff portal) of that specific island has been destroyed: all gems stolen on that island are spat out of the cave entrance with the bomb detonation.[4] However, in order to collect them, the Monarch must escape the bomb explosion, or a Heir would have to visit that island.

Gems in the pouch are lost for good if the Monarch loses the Crown (or the Crowns, in co-op). This includes both:

Gems lost in these situations are lost forever. Heirs won't find them anywhere.

Unlike coins, gems will never fall into the waters of the river (or sea). If a Monarch drops a gem—intentionally, due to the purse being full, or due to a hit from a Greed or boar—this gem cannot fall beyond the line of the ground.

All gems originally come from a gem chest, a fancy coffer found in the forest. For further details, see: Ruins § Gem chest.

It is possible to store gems with a merchant banker that appears by the central wharf. For further details, see: Gem Keeper.

There are 26 different unlockable features in the campaigns, including statues (4), hermits (6), and mounts (16). They are all listed below along with the number of gems required to unlock them (between parentheses) and the island they're unlocked on.

The precise amount of gems found on each island is listed on the second column. The total of gems available in all islands, and the amount required to unlock all features is thirty-eight gems.

For the rulers' abilities unlocked in Norse Lands, see: Stones of Power. 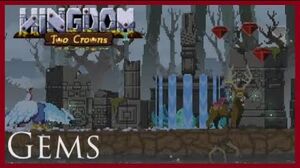 Acquiring a gem by day IX grants the "On the Ninth Day" achievement.

The gems system has been introduced to replace the signpost. People didn't always understand the previous unlock system and, because of it, thought there was not that much unlockable content in Kingdom: New Lands. It was often left locked.