Forest[1] in Kingdom is an area between two trees on the foreground far enough from each other to form a grove on the background. These areas can be commonly found outside of the Kingdom and make up the majority of unexplored lands.

Forests outside the Kingdom are typically dangerous places for several reasons:

In short, it is risky exploring forest areas, especially if beyond small portals past noon. When chased by monsters in the forest, a monarch with no coins and an exhausted steed will most likely lose the Crown.

Tree is the basic structural unit of a forest.

Forests can be shrunk and even completely wiped out, but only the few trees at the left and right borders of the forest area can be removed at a time. How deep are these "borders" it's usually up to a point where the sunlight can still illuminate the environment. When these trees at the border have fell, the forest in the background foliage will gradually disappear, allowing more trees to be removed.

Trees can be cut down by builders if marked with one coin, after which an "X" marking will appear carved in the tree's trunk. After a builder cuts down the tree, it will disappear and the builder will earn one to two coins that they return to the Monarch.

Once the sky is clearly seen in the background that area of land is then designated part of the plains biome, allowing construction of walls, archer towers, and farms, and grass patches begin to expand along it.

Builders will not cut down trees if located too close to or behind a small portal but will however go out right after it is destroyed leaving them vulnerable to the counterattack wave if the wave comes from that side and the marked trees are far from the walls.

Kingdom Two Crowns – Some larger trees in Europe take more hits to fall, and sell for up to three coins.

Structures that may occur naturally in the forest include:

Merchant settlement and vagrant camps will disappear once either of the nearest tree west or east of it has been cut. If the Monarch is attempting to recruit as many citizens as possible, it is best not to tear down trees next to camps as this will remove said camps. Other structures such as portals, chests and hermit huts will not disappear due to deforestation.

Kingdom Two Crowns – As of the Conquest Update, the Monarch has the option to build a citizen house in the place of a vanished vagrant camp.

Forests do contain boulders, streams, and dirt mounds, but they are unavailable for construction upon until the Monarch orders the area to be deforested by builders.

Shops for weapons like the forge may appear on empty spaces inside a forest if an outer wall has been built beyond that forest portion, making it part of the Kingdom.

Look for clearings, they can be used to build past the camps.[3]

A forest with no clearings is a woodland that extends, uninterruptedly, without a single patch of plain, from the town center surroundings up to one of the island extremities, either to the cliff or to the dock portal.

Sometimes RNG will give me an island with a forest from my settlement all the way to the cliff/dock portal. These often have vagrant camps near my settlement, meaning I can't clear them from my side (or else put myself in an unwinnable state), but clearing them from the other side involves a trek for my workers over a day long.[4]

This sometimes can happen due to the random land layout generation. This type of forest is known to impose certain difficulties while expanding the kingdom boundaries. There's nothing players can do to avoid it. And there's very little they can do to adapt to it. One of the issues a forest with no gaps can cause is that it leaves Monarchs with only two options while expanding:

This certainly is the most obvious decision, but it could cause a Merchant settlement to vanish, or even worse, make one or more vagrant camps to disappear. So the bad consequences of this option would lead players to consider a second one, less evident:

For players with average experience this can be easily done on the first and second islands. For well experienced players it can be done with some planning on the third island. But on the fourth and fifth island this is extremely tricky, if not impossible, particularly in Two Crowns where islands are much larger.

No clearings in Two Crowns[]

The size of islands in Kingdom Two Crowns is huge if compared to the lands in the previous titles. That could explain why players have expressed more anguish and anger whenever they have to face this type of layout in Two Crowns.[4] On top of that, the patch 1.1.9—the "Never Alone" update, on April 2021—has widened islands even more, but apparently without tweaking the percentage of forests or the number of gaps in the landscape generation to adapt to the new sizes. Since then, some players started seen this layout more as a flaw in the game design, rather than just an acceptable bad RNG.[5]

As of the Conquest Update, the Monarch has the option to build a citizen house in the place of a vanished vagrant camp. Hence the issue of no clearings becomes less troublesome.

Deer appear in the forest during all seasons except winter. A mother boar appear in the woods during the winter in Two Crowns. For further details see Wildlife.

Clearing a huge section of woodland (the entire island in Two Crowns) grants the achievements:

A coint chest in the ruins 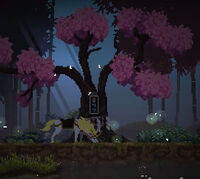 The kirin in Shogun

Some deer following a stag