Fire barrel[1] is an extra non-free ammunition available at the siege workshop once the castle keep has been reached on that island.

A single fire barrel can be purchased for five coins. The pile of barrels shows up to six, but the stored number seems to be unlimited.

Once bought, workers roll them one by one towards the catapult near the outer wall on the side they were bought. At the borders they are once more stacked up to be fired into the first wave of Greed causing the ground to catch fire for a few seconds, and do rapid damage over time to any Greed that touches it (similar to the lizard's attack).

Fire barrels are good to be used on Blood Moons or whenever dealing with breeders and crown stealers. 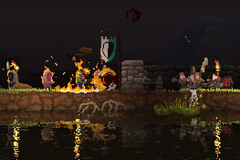 A crown stealer jumping a wall while burning.