(which is retrieved back)

It barks in the direction of an incoming greed wave.[1]

The dog is a small companion that helps the Monarch to foresee where the greed are coming from by barking in that direction.[1] This is especially useful just before one-sided waves such as Blood Moons. The dog does not engage in any form of combat, much like villagers and farmers.

Two Crowns: The dog also howls before an incoming Blood Moon, around dusk. 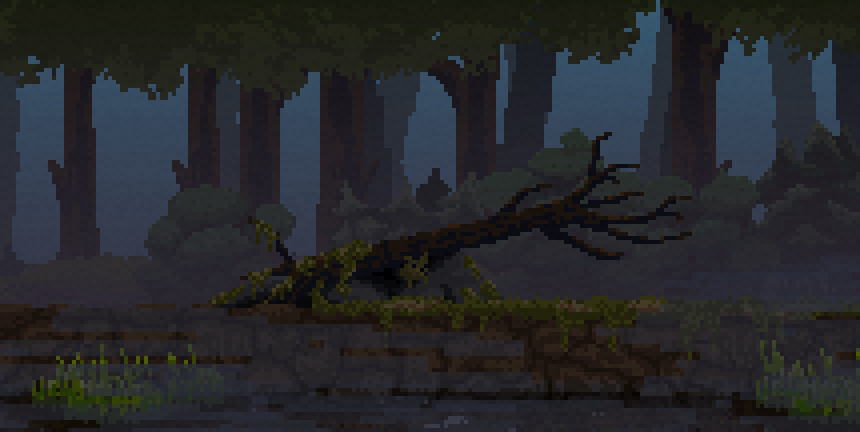 Dog is the real MVP.Angelica[2]

The dog is found stuck under a fallen tree within a forests. Dropping a coin on the tree, breaks it and frees the dog, who will follow the Monarch from that point on, even between lands by boarding the boat as it sets sail. The coin used remains on the ground and can be recovered right away.

Kingdom: New Lands – The dog can be unlocked by paying for the signpost on the second island. Thereafter, a new dog will be found under a tree in all next islands.

Kingdom Two Crowns – The dog is only found and released on the second island. Revisiting this island with the same Monarch won't make a new dog appear.

If the Monarch crosses an active portal, a greedling may spawn just when the pup reaches the portal and take him. To prevent that, one should avoid exploring behind portals after midday or follow one of these strategies (listed from the slow-costly-safe on top, towards the fast-cheap-risky on bottom):

The dog can be kidnapped by a greedling, that will try and flee with it into a portal. It is possible though to save the dog if military units or a mount with an aggressive ability can neutralize the greedling before it crosses the portal goo.[3] If the dog is taken away, a new one won't appear on that land.

Kingdom: New Lands – A new dog will be found in every new island, even if the Monarch already brings a dog with them. Freeing the newer animal though will result in the old dog running away and disappearing. A kidnapped dog can not be rescued.

Besides killing the greedling that stole the dog, there are other two ways to get the dog back. The first one is to lose the crown (or crowns if playing in co-op) and then to go back to the second island to free a new dog stuck under the trunk. The second way is to destroy the cave with a bomb on the island the dog was kidnapped. If the Monarch escapes the explosion, they will find the stolen dog in front of the destroyed cave, along with any hermits and gems that may likewise have been stolen on that island.

For the wolf cub and its own characteristics, see: Dire Island § Wolf pup.