The dock[1] is a structure present on all islands, except the Skull and Plague islands. It is the place where the boat is pushed to, after being reconstructed by the builders. And it is where the Monarch can board with the crew to a new island.

Kingdom: New Lands – Each island has only one far side dock.

Kingdom Two Crowns – Each island has one far side dock and one central dock.

The central dock is the main dock of all islands and it is located relatively close to the town.

It is the only departure dock, from where the Monarch will always sail when moving to another island. If wanted, before setting sail, reinforcements can be requested for the next island by ringing the wharf bell.

It can also be considered a "free arrival dock", the only trouble being that all boats will crash when approaching the area. Without an activated lighthouse, all trips between islands will end in a shipwreck a few meters to this dock.

Once the town center has been upgraded to castle keep, a stone coffer will appear by the central wharf of each island. The Monarch can deposit gems there and take them back for one coin each.

Kingdom: New Lands – The far side dock is acessible at any time for the Monarch and for the boat, once it is rebuilt.

Kingdom Two Crowns – This dock is guarded by a dock portal, which does not block the boat passage, but blocks for the Monarch the way to the lighthouse.

There is always a small patch of green grass by the dock where mounts can graze.

Direction of the dock[]

Finding the direction of the dock is one of the main task for the Monarch who wants to plan and optimize the establishment of the Kingdom. It can easily be determined without exploration by beginning the repair work on the ship. Whichever way the prow is pointed after the initial ten coins have been paid is sure to be the way that the boat will be pushed once it is in the water.

Another useful way to tell the direction of the boat requires the Monarch to have an odd number of knights onboard (either one or three knights). Having arrived on an island with an odd number of knights, the side with the higher number of knights (one knight if only one knight is brought along, or two knights if three knights are brought along) will be the side to the coast where the ship is heading. Although this way requires no resources or material when begining the journey on an island, it does require the Monarch to beat at least one island in that run, so that they can get a hold of the knights needed. 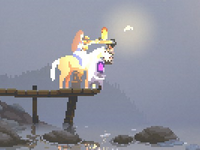