This is a strategy page.
For the descriptive article, see: Portal or Knight. 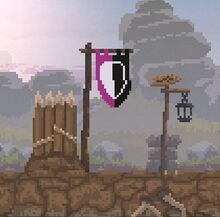 Portals can only be destroyed by sending out knights and their company to attack it. Or (by accident) by archers searching for food (when the border of your kingdom is near a portal) or by archers who are on the boat when it is leaving and it sails past a portal (Kingdom: New Lands).

Portals do not regenerate health, so any damage inflicted by a knight's party is permanent. Portals that are under attack release a few greedlings. The longer the kingdom has existed, the more greedlings will appear.

When any portal is destroyed, the active portals remaining spawn huge numbers of monsters, at least as strong as the blood moon event. These monsters are not limited to night and will attack the kingdom as soon as a portal goes down. The knights and archers under his command will immediately run back to the rally point on the border of your kingdom, leaving them vulnerable to enemies that might chase them. 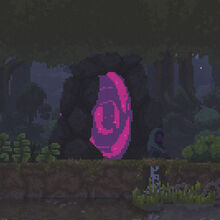 When it comes time, the Monarch can build an army and march on a portal. Townsfolk can pick up a shield at a fully upgraded town hall to become knights. Upon command, they will lead an attack force of four archers through the forest to the first portal they encounter.

When a portal detects it's being attacked, it immediately activates and starts defending itself by sending out greedlings until either the portal frame is destroyed or the attackers are dealt with. The knights focus entirely on defending archers, while archers split their attention between killing greedlings and damaging the portal.

In New Lands and Two Crowns, knights may actively attack the portal and the greed if they have the statue of knights' blessing. 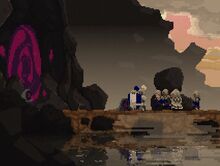 One potential danger is how far away the portal is from the Kingdom; depending on the island, the sun might be setting by the time the Kingdom's army arrives, at which time the Greed will already be launching their nightly raid. (The force behind their nightly raids is far less survivable than their portal defenses.) One way to avoid this problem is by ordering the assault the morning after a Blood Moon sets; the Greed do not to attack the night after a Blood Moon raid.

For all the steps and tips to destroy the cave in Kingdom Two Crowns, see: Cave.

Retrieved from "https://kingdomthegame.fandom.com/wiki/Destroying_portals?oldid=14150"
Community content is available under CC-BY-SA unless otherwise noted.