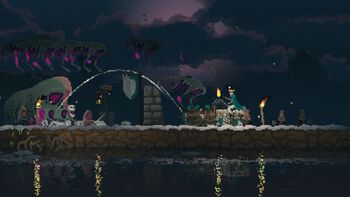 This is a strategy page with tips for defending against the Greed, specially during Blood Moons. For a full description of these elements, see: Greed and Blood Moon.

Tips are ordered from the more basic at the top to the more advanced at the bottom. All tips are compatible with each other, unless otherwise stated; and all have advantages and disadvantages.

The Monarch can set up various defenses against the Greed. Walls can be built to temporarily hold back all ground monsters. Archers can fire volleys of arrows over walls at the Greed or directly at them if encountered face-to-face. They automatically mount towers to gain elevation and better line-of-sight over walls. Worker-operated catapults launch boulders to flatten mass quantities of greedlings but are slow to reload. Lastly, knights defend ground troops in face-to-face combat against greedlings when the outermost walls of the Kingdom fall. Pikemen impale the greedlings when they get to the wall and ninjas will run out into the woods and ambush the greed with swords and shurikens.

The following tips do not require the Monarch to be near the outer wall during an attack.

These following tips require the Monarch to be near the (correct) outer wall before or during an attack. To quickly find and reach the side being attacked, the Monarch has options like looking for the active portal(s) during the afternoon, or checking with a dog, or using Teleporters to quickly cross the Kingdom.