Dead Lands is a setting used for the Dead Lands campaign and for the Trade Routes challenge. It's inspired by the gothic horror action-RPG game called Bloodstained: Ritual of the Night,[2] which was developed by Koji Igarashi’s ArtPlay and published by 505 Games. 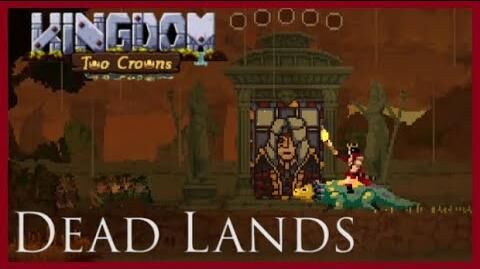 Dead Lands brings Kingdom to a dark gothic world. But do not fear, you’ll be able to play as the heroine Miriam and three other characters from Bloodstained: Ritual of the Night, each with a powerful trait.Raw Fury [3]

Since launch, monarchs have been building their Kingdoms in the classic medieval and feudal Japan inspired settings. Now things are about to get darker and creepier with Dead Lands, a completely new setting that will change how kingdoms are ruled. Taking place in a gloomy gothic world with eerie mounts, building a kingdom has never been more frightening than this.

For the first time in Kingdom, players will not only be able to change which mount they roam around on while they explore and expand their kingdom but they’ll also be able to switch between four different Monarchs, each with a unique powerful trait. These four new monarchs in Dead Lands all come from Bloodstained.

New rulers will start out as the shardbinder Miriam, and during their journey unlock the demon hunter Zangetsu, the summoner Gebel, and the alchemist Alfred.

The deep forest environments may be fully dark to the point of not allowing players to see portals, coin and gem chests, and mount habitats, nothing, no matter the time of the day or the night. They can only see the few objects that have self illumination, like vagrant camps, and some typical Dead Lands vegetation with auto/bioluminescence. Greedlings, that have a weak light on their "face", are very hard to spot. The game may become unplayable due to this bug, that has been around at least since Never Alone update - 1.1.9, on April 2021.[4] This is different from the 2020 bug that made the entire land dark, and seems to have been fixed.[5]

Dead Lands was introduced with update 1.1.2 as a free DLC on April 28 on all platforms the game is available for. The long-awaited mobile version was launch simultaneously and includes special customized co-op modes, tailored touch controls, and support for wireless gamepad controllers (on OS versions with native support).

Gebel and the golem