Daytime in Kingdom is the period of the day during which the Sun lights up the sky, Monarchs' domains are found in relative peace, and townspeople can do their daily job.

Although the concept of daytime can commonly appear on sentences through the word "day" (as in the expression “during the day”, for example), it is easy to recognize the "daytime" idea, because it's distinguished from nighttime. "Daytime" is much less ambiguous than the word "day".

The exact beginning of the daytime period may vary according to the parameters used to define "daytime":

These things may or may not happen together.

Daytimes are preceded by nights, and nights are normally marked by waves of Greed. Waves end when all of their monsters have either died or fled back to portals. If the wave is not defeated during nighttime, a few different behaviors can be observed according to the type of monsters, and the type of waves.

As nightly waves are composed by greedlings only (except in the extremely late Two Crowns campaign and on Plague Island), this type of wave can't go beyond twilight. After a regular wave, morning bell, dawn, and number of day, all happen together.

As Blood Moons may have breeders and floaters in their composition, this type of wave will keep pushing into daytime, especially if the Kingdom defenses are weak. If a Blood Moon isn't defeated during nighttime, dawn and number of day will happen together, but the morning bell will wait for the annihilation of the wave.

In counterattack waves (after destroying any type of portal) no Greed can ever retreat because this type of wave disrupt the day-night cycle by making the Sun completely disappear from the sky the moment the portal is taken down, and by allowing the next sunrise only when the wave is defeated.[3][4] If a counterattack wave isn't defeated during nighttime, the number of the new day appears at the scheduled time, but dawn and morning bell will only take place when the wave is completely exterminated.[5]

The clanging of the bell marks the social beginning of daytime in Kingdom. It proclaims and celebrates that the last wave has been defeated. Townsfolk will only leave their siege posts when they hear the morning bell. This is how citizens know, all over the Kingdom, that the last wave has been disbanded, that they have survived one more battle, and that they can start their diurnal activities.

The relative peace and the citizens' work tend to occur simultaneously. Sometimes though (commonly when the Kingdom defenses are much stronger than the Greed assault), waves are defeated perceptibly before dawn, in which case the morning bell won't ring earlier because of that. In Kingdom, if it's dark, it's dangerous.

So the morning bell is the ultimate clue to determine if a new working daytime has started. It won't clang before dawn, and it will never be heard if there's still greed harassing the Kingdom. When it rings, the whole Kingdom is sure to have that relative peace so crucial for the daily activities.

Two Crowns – An autosave is triggered each time the morning bell rings.

Dawn marks the beginning of solar daytime in Kingdom.[7] It happens a few seconds before sunrise, and starts the atmospheric phenomenon called twilight, when the Sun, not yet directly visible, softly illuminates the sky. With good weather—not misty, cloudy, rainy, or snowy—the moonlight and the stars are still visible at this moment. On plains, with the regular hilly and cliffy horizon, the dawn lasts for around twenty seconds, then the Sun rises.

This is when the lizard can start sunbathing, providing it's on plains, and not during winter. And this is when the wolf will no longer be able to howl.

The morning, before noon, is the ideal time to discover the landscape, recruit civilians, activate statues and shrines, especially if those are located beyond a portal.

Noon is when active portals, that have been exhausted since the last scheduled wave (nightly wave or Blood Moon), recover their ability to recognize hostile presences, remaining on this state of alert until the moment when the Greed wave has been fully launched.

Past noon the Monarch risk triggering those greedlings that come one-by-one out of the portal, and even being caught by the scheduled wave.

At sunset all the diurnal activities will cease, and the Kingdom will prepare against another wave. All military subjects will have assumed their defensive positions by the end of dusk in small reigns, and before midnight in the larger ones.

The day-night diagram below shows the length of one entire day in in-game minutes (min) and seconds (s). The daytime period is highlighted on green:

Mobile users can see the diagram on the desktop version of this article.

Counterattack waves only, and nothing else, can disturb the rhythm of the Sun.

Number of the day[] 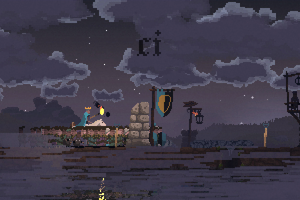 The big number that appears in the sky early in the morning.

The diurnal activities are all the tasks done by the Kingdom citizens that depend on the relative state of peace announced by the morning bell. Below is the list of such occupations.

Note that builders will not wait for the morning bell to start working. They try to accomplish a Monarch's order as soon as it's received, even if it's for going on the wilderness during the night. They are the most typical non-military employed subjects in the Kingdom, but as they're responsible for building the infrastructure of the reign, the work of other subjects depend on them (for example: archers require a deforested area to start hunting bunnies). So, in order to not let other classes waiting during precious daytime, builders won't wait for the bell.