A day-night cycle, a full day, a new day or simply a day in Kingdom is the period of time encompassing one daytime period and the following nighttime.[1]

Length of a day[]

This can be verified by looking at the day number on the pause screen. It changes in the middle of the night in Classic and Two Crowns, and when the big number of the day appears in the sky in New Lands. This time mark is also taken into account by some achievements like "On the Third Day", for Two Crowns: starting the camp after midnight, and before the morning number showing III, still triggers the achievement.

Despite technically starting at midnight on two titles of the series, a new Kingdom day in this wiki[2] is considered to begin at dawn (shown in orange on the diagram below) and lasts for about four real life minutes in total. The day-night diagram below shows how this length of time is shared between daytime (highlighted on green) and nighttime (marked on blue). The time units used are real life minutes (min) and seconds (s).

Mobile users can see the diagram on the desktop version of this article.

For further details about the beginning of day, see: Daytime.

There are two day counting systems: a day count per island, and an overall day count. The later only exists in Two Crowns where islands are persistent.

Day count per island in New Lands and Two Crowns or simply day count in Kingdom: Classic, is the counting system that keeps track of the amount of days passed from the Monarch's arrival on a new land up to the current in-game day.

Resetting the day count per land[]

In all Kingdom games it's possible to reset the day count per land by starting a new run from the game menu (see the steps on Saved game § Save slots).

Kingdom: Classic – Starting a new run on a new land, and consequently resetting the day count, can also be done:

Kingdom: New Lands – Resetting the day count per island can be done:

Kingdom Two Crowns – As islands are persistent throughout the campaign, the day count per island is never reset, neither with travels, nor if Monarchs lose their Crowns. Only starting a new campaign would lead the Monarch to a new archipelago, restarting the counting of days per island.

The overall day count is displayed:

The overall day count may have the same value of the day count per island if the Monarch hasn't traveled yet, and hasn't lost the Crown.

This number is used to calculate the amount of decay accumulated on all lands when Monarchs are absent.

Overall day count is also tied to the the progression of seasons.

The overall day count also has a direct relation with the power of the Greed on all types of waves, except on retaliation waves. This means that the waves affected by this number grow stronger each new day, and can be reset (see below) to their very initial state.

The overall day count is reset when Monarchs lose their Crowns and are replaced by Heirs.

Both day counting systems can be tracked by the player through the user interface (UI), each system on different places of the UI. The table below summarizes this distribution, and gives links to the sections describing each space.

The morning day number (or simply the morning number) is a large, black, pixelated Roman number that shows, high up in the sky, the counting of days:

Usually followed by the sound of the morning bell, the morning number marks the technical beginning of daytime in Kingdom.

It is taken into account by a lot of achievements related to a specific day. For example, the "On the First Day" achievement, present in all titles of the series: the Monarch has to recruit eight archers before the number of the second day appears. Likewise, all the "Survive past day N" in Classic and the all the "Survive Day N" in New Lands. To survive day C, the Monarch has to keep the Crown until the number of day CI shows up, no matter if the Sun has appeared or not, or if the morning bell has rung or not.[3]

Kingdom Two Crowns – There are two numbers on the pause screen. The number appearing on the top right tracks the overall day count, while the number on the lower right corner, over the map icon, shows the day count per island. 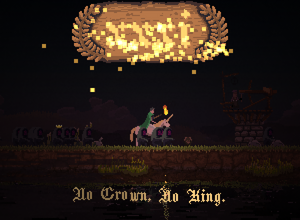 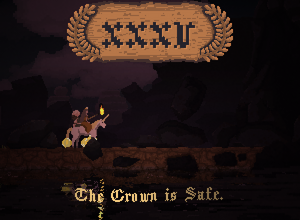 The historic (commemorative or memorial) plaque appears on the most prominent moments of the Kingdom, marking with golden fireworks the number of the current day in Roman numerals on a decorated wooden tablet. The plaque appears on the top, along with a short sentence on the bottom which will vary according to the type of event:

* There is no yellow pyrotechnics when traveling or losing the Crown in Two Crowns.

Kingdom Two Crowns – The heirs' column on the map will display the whole succession of Monarchs, along with the amount of days each of them carried the Crown (overall day count), including the current Monarch. For further details, see: Map § Right side.

Day number on stats board[]

Kingdom Two Crowns – The total number of days the Monarch and their heirs (if any) have spent on an island will appear on the stats board as "DAYS PLAYED", after destroying the cave of that island.

Optionally, players can use separate apps such as the unofficial companion app Daeg-Mael to track days and seasons.

The progression of time also causes: