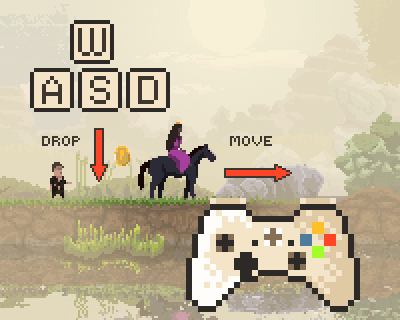 The Kingdom games are notable for their minimalist gameplay that has a handful of controls.

Starting a new game the Monarch will be guided by a sparkling trail in Kingdom: Classic and by the Ghost in New Lands and Two Crowns through a simple tutorial in which the basic controls will be taught. This tutorial is adapted to each platform and its controls.

Some mobile versions of New Lands feature touch controls with a virtual game pad. Other devices will accept physical extra controllers as seen in this case.

Two Crowns co-op – There is no way to customize the appearance of the second player. They will just get their characteristics randomized when they join the campaign for the first time.

When starting a new campaign, players have the opportunity to select between five different difficulty levels:

To cicle between them, players should:

The default difficulty mode (if the players do not change it) is Normal. Once a campaign has been created, its difficulty cannot be changed.

All game mechanics remain the same between the different modes. Only the spawn rate of enemies on waves are adjusted accordingly.

This feature was added on May 2022, with patch 1.1.16. Campaigns started before the update were assigned to a difficulty level equivalent to the current Normal mode. 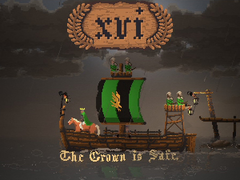 [This section is outdated for Kingdom Two Crowns.] Once on board: 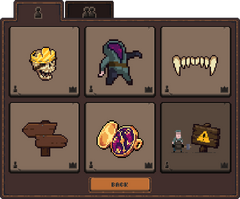 Trees cannot be unmarked and walls cannot be removed. Once the Monarch gives an order, it cannot be cancelled. There is no cancel command, cancel task, cancel job, cancel work, or cancel build. For further details, see: Cancel.

Players can however exploit the autosave as if it was a "check point".

When there is public test beta branch available, this is how to access it:

In order to experience balance changes you will need to start a new campaign.

This section is about Kingdom: New Lands on Windows.

If the player alt-tab to a different application, minimizes the game window, or click on any thing outside the game environment (for example, while using a second monitor), the game will stop running. The game creator Noio explains this behavior:

It's simply a choice we made. The game pauses in the background to prevent the player from accidentally changing window and losing the game. I could easily change it but I'm not sure how many people rely on the current behaviour.Noio on Reddit, 7 September 2016.

Waiting for the boat to reach the dock can take several in-game days and this generally happens when Monarchs have done every task they had to do on that island. In moments like these, even if players spend some time appreciating the music and the pixel-art, they may end-up considering being away from keyboard (AFK) a suitable method to deal with the lack of in-game tasks.

On all platforms, players are limited to stop playing while letting the game open. On Windows though players can alt-tab to other applications without pausing the game. Follow the steps below to keep the game running even when it's unfocused:

You can now alt-tab from the game—and to whatever application you want—during the boat pushing or while going for the Day C achievement without pausing the game.

The Steam controller shouldn't cause any trouble in Classic or New Lands. In Two Crowns however, it is set by default to give access to a second player, and will pop up a message requiring a confirmation for the split-screen. If the player wants to play solo with a Steam controller, this default behavior might be a bit frustrating. But there is a way to use Steam configurations to change that. Follow the steps below:

Sticky keys is a feature in Windows that can help users with physical impairments. By default, it can be turned on by pressing Shift five times in a row. But this shortcut can be easily triggered by mistake by users who do not need the sticky keys, especially while playing games with the keyboard. Here's how to turn off Windows 10's sticky keys feature for good, and disable that shortcut:

The game options (image at the right) are self-explanatory, with the exception of blazon setting, explained here.

The player is able to choose zoom, sound and music levels.