Cooperative, commonly abbreviated as co-op, is an alternative way of playing Kingdom Two Crowns, where two Monarchs cooperate with each other within the same Kingdom.

The player one must have finished the tutorial before starting a local or online cooperative game.

When a 2nd player is detected, a pop-up gives the options:

There are different ways to trigger this splitscreen pop-up.

To start a local co-op with the keyboard, press G, J or ~ (or the key between ESC and Tab, if in a non US keyboard). See the second player controls.

While playing with the keyboard, plug the controller (or press the Start or the "pay coin" button) for it to be detected.

Start the game with one controller and plug/turn on the second (or press the Start or the "pay coin" button) for it to be detected.

If this does not work, try restarting the game with both controlers already plugged/turned on.

On Switch, in order to get it to recognize each joy-con as a different controller follow these steps:

To go back to single player with joy-cons, slide both controlers into the main unit, and it will recognize them as being only one. The splitscreen question should pop up again.

For Steam users only.

There is no random matchmaking for online co-op.

We purposefully do not have a matchmaking system because
we strongly believe it would lead to griefing in the community.Raw Fury [1]

Players may find partners to play with on:

A specific Steam forum called Looking for People to Co-Op With There you can find a thread for your language, or created a new one.

The official Raw Fury Discord server Once there, go on the channel "looking-for-group", under the section "Kingdom Series".

Nintendo Switch, Apple, and Android mobile do not have access to online co-op, but all have local co-op.

Nintendo Switch – Users can find out more about this matter in this post. As long as the post there is still pinned 📌, these are the latest words from Raw Fury.

Android & Apple mobile – “It’s coming, due to Unet being shutdown by Unity we’ve had to redo it with a new system. Sadly it’s taking a bit longer, but it will come.”—Gordon[2]

When two people want to play online co-op but only one of them has the game on Steam, they can try the Steam Remote Play, which is basically that the screen of player one is streamed to player 2, and player 2 keyboard/controller input is streamed to player 1. That sort of turns it into a local co-op game session, except the two players are on different places. After having invited a remote friend to play, follow the instructions on Local co-op to activate the cooperative mode.

There is no cross-platform support for cooperative playing.

Players using Steam though can play online together no matter if they're on Windows, Mac, or Linux.

Are there any plans to make co-op cross-platform?

2018: “There are no plans to make it cross-platform. Nobody can tell the future, but I wouldn't hold your breath. Crossplay is complicated and the development team for Kingdom is very small.”—Kristi [3]

2020: “It’s something that might be possible in the future, but we have a lot of work to do with online since Unet is no longer being supported by Unity.”—Gordon [4] 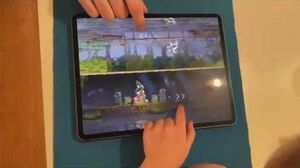 You’ll be able to play regular stacked coop when sitting next to your fellow monarch, but in case you sit across from each other, you’ll be able to play a custom mobile and tablet sky-to-sky feature that we call Tabletop Coop! This is just one of many cool new things coming soon to Kingdom Two Crowns on iOS and Android.Raw Fury [5]

Playing in coop make a lot of things easier, like having two different mounts, doubling the coins and gems carrying capacity, and being able to manage both sides of the kingdom simultaneously.

Both monarchs need to lose their crowns in order to lose the game. If one monarch loses the crown, the other can craft them a new one for 8 coins. A crownless monarch isn't able to interact with anything and the Greed ignores them.

On 29 March 2021, a cooperative mode for the Challenge Islands has been announced as an incoming feature. On 14 April 2021, Raw Fury released the trailer for the Never Alone update. One week later the update went live, making all challenges playable both on single and cooperative modes. 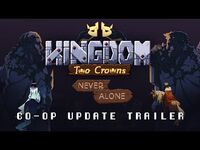 Coop is just an option, SP is the primary mode of Two Crowns.[6]

The name of the game, especially when popularly abbreviated as "Two Crowns", is a clear mention of the co-op feature. Two Crowns, two Monarchs, two players in cooperation. This mention is related to the roots of the original project, made public at the Game Developers Conference on February 2017. At that moment, "Kingdom: Two Crowns" (then with colon) was intended to be a multiplayer expansion pack for Kingdom: New Lands. It was planned to be released by the end of that year, simultaneously with the New Lands edition for Nintendo Switch.

Nintendo got their edition. The Two Crowns project was postponed and grew way beyond the initial concept, but kept the same title. Passed the game release and a considerable amount of major updates, it isn't hard to understand that, despite being honored in the title of the game, the co-op feature became just one of the many important additions of Kingdom Two Crowns—no longer defining nor outlining it. 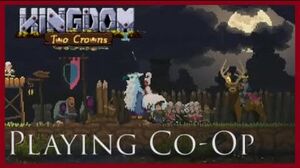 The first and most obvious benefit to co-op is that twice as much territory can be explored in a day if one person goes left and the other heads to the right. Coinage can also be shared, so if one player is short on building a guard tower or wall, it’s easy to throw some change their way. Another big bonus is that if one player has their crown stolen the game doesn’t end. The crownless player can’t build nor craft any equipment, however they can still gather gold coins or gems and hand them off to the remaining ruler. Another possible benefit is if they have a mount or monarch with an ability, as they can still use it, which makes crownless kings very effective against greed hordes, and potentially a fighter, if using the right combinations, as they are completely ignored by enemies, and can even take down portals on their own, although very slowly, if mounting a Gamigin, unless they have any coins in their bag, as otherwise they will lose coins when attacked be greeds. It is advised that the remaining player has to be extra careful to not lose their crown, as while it makes the hordes easier to handle, it also means the last player has to be protected very carefully. If necessary, a new crown may be crafted, and the other player may fully rejoin the game.

Since we're two players, if the Greed take my crown, for example, then you could come and help me by crafting a new crown for me, but while I'm crownless I can't really do anything; I can just collect money and give it to you, basically. So we need to stick together in that regard.Liam O'Neill in Gamereactor's interview (3′15″). 16 May 2018.