This is about Kingdom: New Lands.

The Christmas event in Kingdom is the special period starting on December 24, and running until the end of December 25, during which magical things with some of the real life Christmas symbolism become available; some mechanics and aesthetics are modified to inspire the festivities ambience.

There have been fables of an individual dressed in red running around the place, whatever could it mean? And why do our lamp posts taste like peppermint? You can't really blame us for licking the lamp post, they look too delicious not to.

A Christmas update for Kingdom: New Lands is now live until the New Year! There are a few secrets in there, too, so happy hunting! We also took the time to tweak the game a bit, so this is an official update with patch notes below.

Have a great holiday and a Happy New Year!Raw Fury. December 21, 2016.[1]
Twas the night before Christmas, and the sleigh with gifts was out of sight,
Atop a reindeer, the Monarch searched for it in the snowy midwinter night.

The holidays are upon us, and this calls for a celebration in Kingdom: New Lands! As a regent it’s up to you to explore and get the Christmas spirit going. Why don’t you start by decorating the giant Christmas tree? Pay a visit to the poor snowman that struggles to survive during Summer, and it will give you a more festive appearance. And if you’re lucky, you might find The Great Reindeer to match your new outfit. There’s more to the Reindeer than the lovely red nose. Can you figure out the secret? Maybe it will unlock some presents…

Start a new reign and sail to the second island to take part of the festivities. 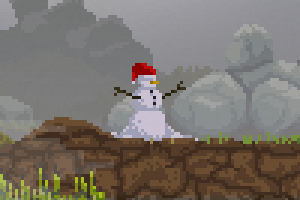 On most islands the Monarch travels to during this event, it is possible to find a snowman wearing a santa hat. Putting three coins into the snowman will allow the Monarch to don a santa hat and a red cape (for Kings) or a red dress (for Queens). This will also change the color of some of the banners and such to be red and black.

The Santa clothes along with the reindeer is required to take possession of the sleigh dropped from the Christmas tree.

Also during Christmas, on almost all islands, it's possible to find at least one reindeer, a mount similar to the stag, used to take control over the sleigh. 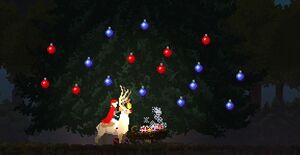 On almost every new island, a huge Christmas tree appears in the woods. It takes in seventeen coins individually to decorate the tree with ornaments, at which point a box will drop from the sky and break into a sleigh with presents.

It is not possible to pick up the sleigh without the reindeer and the Santa clothing (one can still place the ornaments and the sleigh will drop, but it will not connect without both).

Once it connects to the reindeer, it will follow behind the Monarch with a snowflake trail, periodically dropping three to four presents whenever passing by a townsperson every ten or so seconds, which turn into coins when picked up. It lasts for a while, earning the player upwards of fifty or more coins, making it immensely beneficial to obtain and profit from. You can easily fill the keep vault from the coins it drops alone.

Coins dropped in the form of presents from the sleigh on the left. Due to the sheer quantity of coins the sleigh drops before it runs out, it's recommended to stay near the base. The coins visible inside the keep in this picture are exclusively from the presents dropped by the sleigh, which still has more presents to drop in this picture.

The value for local date and time is the trigger for starting and ending the event. Outside this period, it's possible to trigger the Christmas event by changing time and date of local operating system. As this can cause other local programs to behave oddly, only do this if you understand what you're doing. And remember to correct the values after you're done with playing.