Is this the final location to end the Greeds vile existence, to put an end to their monstrous pursuit to end our rightful expansion? Only time will tell![1]

The cave[2] is the Greed lair on each island. It is accessed through the cliff portal.

Destroying the cave secures that island and stops the greed spawning on it, even if there are still standing portals there.

A bomb can be purchased at the iron keep for eighteen coins.

Before paying for the bomb, it is advisable to destroy all small portals on the cliff side. And, if the cliff is too far from the town, it is better to build further walls or wait for a truce past blood moon to avoid encountering greed raids on the way.

Building the bomb triggers a cave assault where:

Arriving with the bomb at the cliff portal, it won't spawn the regular few greedlings to counter the Monarchs' hostile presence; even if the portal is active. Nightly waves, however, keep their everyday routine.

If the Greed attacks the bomb and destroy it before it is lit, the offensive to the cave is dismantled. The explosion of the bomb, in this case, won't harm any friendly units. A new bomb can then be bought to restart the march.

Once in front of the cliff portal, the builders stop pushing the bomb. The Monarch must then spend five coins at the bomb to be able to enter the portal. The whole escort will follow along with the bomb. In cooperative mode, both players must enter together.

The state of the portal does not matter, including being destroyed.

The Monarch can exit anytime. This saves the escort but ends the assault and the bomb is lost. 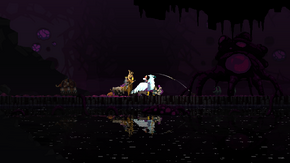 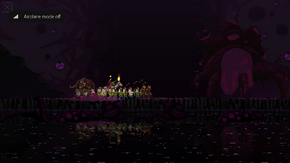 Inside the cave, there are a number of nests, which spawn groups of four to six greedlings when they sense a hostile presence, and can be destroyed much like small portals. A greed nest, representing the Greed idea of a tree, has the appearance of a purple tumorous octopus with its "legs" stuck on the ground as if they were the immersing aerial roots of a mangrove plant. Each nest has 80 hit points, and loses its "legs" as it is damaged, until it collapses. If the monarch leads them close enough, knights can also damage Greed nests. The number of greed nests depends on the island on which they're located. The tables below show their number per land. As Norse Lands has one more island, its numbers are displayed on second table.

Near the end is the hive, the heart of the cave. It does not attack.

Right behind it, at the very end, there is a pool guarding it by spawning greedlings once the last nest falls.

Both cannot be directly attacked, instead, the bomb is set on them.

Once the bomb reaches the hive, it stops and it's eyes glow.

The Monarch must then pay five coins to light it, which causes:

The Monarch has only a short time (fifteen to thirty seconds, depending on the island) to escape the cave. It is best to recover full mount stamina before lighting the fuse, and doing so from the bomb's edge, but even then slower mounts may not make it.

Reaching the exit in time causes premature explosion right at that moment, for fake tension.

After the explosion the Monarchs appear in front of the cliff portal, along with the builders, a random part of the escort in whatever state they were in at the time of the explosion, as well as any gems, hermits and/or the dog that were lost to the greed on that island. To recover them though, the Monarch must have escaped the explosion.

The cliff portal is henceforth permanently destroyed and can not be accessed again. The remaining greeds (if any) retreat back into the nearest portal (or cliff portal if none), and no more ever spawn on the island.

In cooperative mode, if one of the Monarchs does not escape the explosion, they will lose the Crown, but the island is secured, and a new Crown may be crafted by their partner. If the only Monarch in single player or both in co-op do not get out of the cave in time, the island remains secured for their successor. In this case, any gems, hermits or dog spat out of the cave will be permanently lost. If the Heirs visit the cave on that island, they may find its portal open. This is nothing but a visual glitch: the portal won't spawn any greed as that cave is already destroyed.

The following steps exploits the fact that a single player can activate and deactivate local co-op at any time:[3]

Has any mount ever failed to get you out of the cave in time? What's your favorite mount to escape the bomb detonation?
Go HERE to vote.

Were you playing solo or in cooperative mode?