The Greed[1] are the blueish grey, faceless creatures who swarm and attack the Kingdom at night. They spawn from the demonic portals located throughout the lands and attempt increasingly intense nightly raids on the Kingdom and its subjects. They take any and all riches they can get their hands on back through their portals, generally leaving people behind, more interested in the material. On Blood Moons, the Greed mount a greatly increased attack on the Kingdom from a single direction, but allow one night's reprieve afterwards.

There are four types of monsters (the last one only appearing in Kingdom Two Crowns).

For further details about each one, follow their respective links.

Except in Kingdom: New Lands, where portals always respawn when revisiting an island, the goal for the game is to eradicate the Greed from the Kingdom by destroying their portals.

Below are some basic guides on how to deal with the Greed: 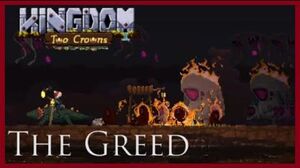