for personal defense
If you send a builder out at night to chop a tree or build a wall, they will do just that regardless the risk or how poor a choice it was sending them to their peril. They live to serve you and will do so regardless.Raw Fury on Steam

Builder or worker is a non-combat subject who help the Monarch to build, repair and expand the Kingdom.

Builders can be used to accomplish multiple types of tasks. They are mostly used to build new buildings and upgrade them. They can also repair damaged buildings, such as walls after an attack by monsters, can cut down trees and can build teleportation portals on destroyed portals. Builders will also man and operate catapults and ballista towers, ensuring that they work properly to eliminate large groups of enemies at a time.

The hammer vendor is required to hire builders. It is unlocked at the town center first tier, the campfire. Once unlocked, it appears just to the left of the town's central campfire.

A hammer can be purchased there for three coins each. Up to four hammers can be waiting on the tool rack at a time. When a villager picks up a hammer, he is assigned to being a builder.

After being hired, builders will engage in the following tasks. After a task is ordered, it cannot be canceled, but its completion can be delayed by ordering additional tasks.

When the Monarch assigns multiple tasks, builders will act according to various priorities. For example, a task farther from the town center is usually given a higher priority. Notably, clearing faraway trees has greater priority than building a new outer wall. Meanwhile, repair jobs have low priority. The builders do not seem to keep task lists and so jobs do not seem to be prioritized according to when they were ordered.

Most tasks can be done by two builders instead of one, with the second builder rushing to help the first, although this has low priority if there is another task to do. Idle builders will not rush to a task if two of them are working there or heading there already. If there is a large number of tasks on one side of the kingdom, builders from the other side may run over to assist.

Work in the wilderness[]

When a builder is assigned a job outside the kingdom's outer walls, they will attempt to fulfill the Monarch's orders regardless of whether it is day or night (and so they do run outside of the walls at night), but builders will ignore job assignments that are close to black Greed portals, even if the portals are exhausted. When builders complete a job outside the outer walls, if it is night time, they will walk (in Classic) or run (in New Lands and Two Crowns) back until they are inside the borders again. If it is day time, they will idle out there during the day unless they are given other tasks to do, or they will walk back to the borders (only in Two Crowns, as of 1.1.14).

Builders can hold only up to two extra coins for personal defense.

In Kingdom: Classic, builders are known for "destroying" coins. See the details on Coin § Disappearing.

Wandering outside the walls[]

Builders are risk-takers at heart and stubborn as hell.
Hard to stop them from playing chicken with the Greed. :DGordon, 14 July 2018, on Steam.

Idle builders like to wander just outside the outer wall at night. Some of them would skip back to security right before the first greedling hits the wall; some not. Those who do not step back may lose their hammer to the Greed. 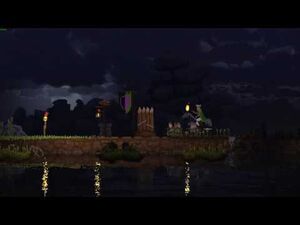 Kingdom: New Lands – The risk of them losing their tool is part of the challenge.

Kingdom Two Crowns – Workers should step back inside the wall just in time, and the risk of them losing the hammer has been drastically reduced (if not completely removed).