A Breeder or Big Greed[2] is a giant enemy that spawns during Blood Moons and after destroying a portal.

The breeder's primary attack is a punch that can knock down swathes of men with a single blow. This leaves townsfolk disarmed, knocked prone, and vulnerable to greedling attacks.

When the Monarch gets punched by a breeder they lose a huge amount of their gold.

Breeders can also plow through walls by returning discarded catapult boulders. They pick up the boulders that were previously fired with a catapult and throw them against the walls or at the Kingdom's subjects.

A thrown boulder can be as devastating to defensive forces as it is when used against the Greed; it has an area of effect, and it disarms and knocks down up to five defenders at a time. It can even knock archers out of a roofed tower. Luckily, thrown boulders can be blocked by knights standing between the boulder and other soldiers, as long as they are holding enough coins.

With a sort of vomiting action, breeders regularly spawn greedlings without masks.

Most summoned greedlings will flee when the sun rises, but those summoned after sunrise, if they live long enough, will not flee until the next sunrise.

New Lands – For a few seconds after a breeder has been defeated, the mount will panic if the Monarch tries pass by the location of the monster's remains.

Kingdom Two Crowns – There's a small chance that crown stealers may hitch a ride on breeders.

Breeders do not flee when the sun rises[needs verifying after the update]. They melt into goo after taking sufficient damage and are thus defeated.

Currently in Two Crowns, breeders retreat at the dawn

Kingdom Two Crowns – Fire can be powerful against breeders, as they take much more damage from it than greedlings do. As of the Conquest Update, the griffin can be used to push back breeders temporarily using its wing gusts.

On Plague Island, breeders that spawn as part of a normal wave will die when the sun rises. Whether this occurs to normal-wave breeders elsewhere is untested. The 1.1.4 patch which made it so that "Large greed will no longer make any surprise visits during the daytime on Plague Island" may have done this by changing the nature of breeders everywhere to die in the aforementioned manner if part of a normal wave. This requires confirmation. 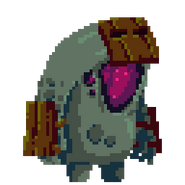 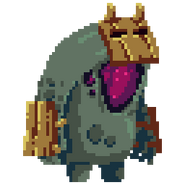 In very late Blood Moons in the campaign, on Skull Island, and on Plague Island after a certain day, breeders wearing a big mask start taking part in the attacks against the Kingdom. Armored breeders spawn greedlings with masks, take a significantly larger amount of hits to be killed, and deal much more damage to the walls.

Back in the original flash game of Kingdom, the first appearance of what's now called "breeder" would simply be a larger version of what is now known as the "greedling". They were all called trolls: the little and the giant troll.

At the release of Kingdom: Classic on Steam in 2015, the big monster would receive a new skin, more like a chunky ogre, and the ability to throw back boulders.

In 2016, a few months before the release of Kingdom: New Lands, the giant would receive its current skin and the ability to summon greedlings. From there, people started calling it the "breeder".

In 2018 Kingdom Two Crowns was released with the same breeder version. And in 2019, with the Challenge Islands update, the armored breeders were introduced.

Below is the changelog related to the breeder on the Steam versions.