→ on walls
→ on subjects
→ on Monarchs

The boar is an aggressive wildlife that can be found in the forest of any island during the winter.

The boar appears from a specific bush in the forest: a shrub with three to four piglets wandering near by. The piglets look all the same in all settings, while the shape and colour of the bush differs slightly.

The boar's bush can exist inside the Monarch's domains: it can be enclosed along with a section of woods if a new wall is built beyond them during the winter; and it can simply appear in a grove that's already inside the Kingdom's borders when winter comes.[2]

The bush and the piglets will remain if the trees nearby are cut down, and if the mother boar gets killed.

If the Monarch walks or stands close to the bush for two to three seconds, the mother boar goes into a sudden fit of rage: it jumps out, grunt loudly, and begin to charge the Monarch.

Monarchs can avoid the boar's rage throughout the entire winter by galloping whenever they have to pass by its den or by not approaching it at all.

The mother boar will stop charging only if:

If none of these three conditions is met, either because the Kingdom defences aren't strong enough, or because the army has been caught out off guard, the boar will carelessly keep charging, which can cripple the unprepared Kingdom, and leave the Monarch open to the Greed. Therefore, depending on the situation of the army, the power of an impending Greed wave, and the amount of coins the Monarch has in the purse, voluntarily getting hit by the boar could be considered to be a sacrifice worth paying in order to avoid further loss and destruction.

Once triggered, the boar will perform a sequence of charge attacks towards the Monarch.

During each charge, the boar will move slightly slower than the sprinting horse, so most monarchs would be able to outpace it. However, the boar's attack is very tough and piercing: unlike greedlings, it cannot be hindered by the griffin's ability; unlike breeders, it won't stop at the first distraction it bumps into; and unlike crown stealers, it won't ignore any hostile unit in its way to the Monarch but will breach through and dismantle a good amount of them.

Targets in the way[]

Each charge has the potential to destroy a limited number of weak walls and disarm a small group of subjects in its way, even though they're not the primary target of the boar's fury. Usually after striking down five targets (amongst walls and subjects), the angry animal stops to roar[3] for two seconds before charging again.

Some factors seem to reduce the amount of targets it can hit per charge, like running long distances before bashing, and if one of the affected objects is a wall. If this happens, the boar will end up striking down only three or four units in total with that specific charge, that is, before halting to roar.

Unless the Kingdom subjects are found behind a strong wall, or if they're numerous enough to kill the boar on open field, they will be knocked down as if they were bowling pins on the lane. Subjects attacked by the boar will lose their equipment and will fall to the ground unconscious for a while, before standing back up and going back to their routine.

The boar will pass through and destroy spikes and palisades as if they were nothing, treating them as just one more target in its way to hit the Monarch. However, if the boar hits any type of stone or iron wall, it'll be stunned for nine seconds, after what it will roar one last time, and retreat back home. The time it is stunned should be enough for a not too small group of archers to finally kill the boar.

If the Monarch is hit by the boar, the pouch is emptied, making about half of the coins fall directly into the water and the rest on the ground, becoming recoverable. If the Monarch has no coins when hit, their crown knocked out of their head. Either way, after hitting the Monarch once, the boar will run back to the bush.

The boar will try and run back to its bush after being stunned for hitting a strong wall, or after having successfuly hit the Monarch once. Each time it performs this retreat towards the piglets, and disappears again inside the bush, the mother boar fully restores its health. After it disappears it can be triggered again and again, as long as it's still winter.

The boar can be attacked by any type of archers (hunters, soldiers and on towers) and is killed with thirty and some arrows. Melee military units like knights can also apply some damage to the boar, if they eventually land a hit.

When slaughtered, it drops thirty to sixty coins. Another boar will only be encountered on another island.

Because the boar only appears during winter, when most wildlife hibernates, it can be a good source of cash if the Monarch is in shortage. 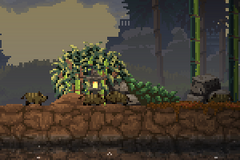 The piglets playing around the boar shrub during winter in Shogun.

A boar chasing the King on a stag on Europe. 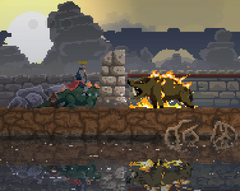 Trying to kill the boar inside the Kingdom's walls with the lizard.