The beetle is an exclusive mount from Dead Lands.

To activate the ability stand still facing away from the desired side and press the trigger button. This will cause a larva trap to be summoned. It is very similar to the lizard ability except it is faster and shoots backward.

Once summoned the larva trap will instantly kill up to five greedlings that walks on and around it. The trap will last for fifteen seconds or until it has killed the five greedlings. It will not harm breeders or flyers. 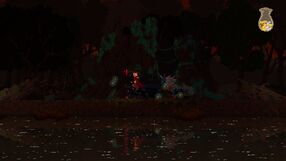 Retrieved from "https://kingdomthegame.fandom.com/wiki/Beetle?oldid=19013"
Community content is available under CC-BY-SA unless otherwise noted.