Archer or bowman is a subject who will hunt animals to collect coins during the day and defend the base from enemies at night. They are the most basic combat units in the Kingdom and are critical to any base's defense.

The bow vendor is required to hire archers. It is unlocked at the town center first tier, the campfire. Once unlocked, it appears just to the right of the town's central campfire.

A bow can be purchased there for two coins each. Up to four bows can be waiting on the weapon stand at a time. If a villager picks up a bow, he is assigned to being an archer.

In general, archers have three major different roles, which determine how they will behave. An archer can be:

As usual in Kingdom, Monarchs have very little control on how they chose their roles, and no direct control at all over their individual activities. The following sections explain their natural behavior.

All archers are initially hired as hunters. According to the job posts created by the Monarch, some of these hunters will jump on towers, and some will become soldiers. All the others will keep doing their primary activities of Hunting during the day and defending the walls during the night.

At the beginning of the day, archers will be found at the outer walls. They will split up unevenly so that some of them stand by the wall, while some of them wander to the left and right, both within the Kingdom and far beyond the walls, until they reach the edge of a forest. These wandering archers will hunt the rabbits and deer they encounter.

New Lands – Archers usually avoid going into a forest unless they are chasing deer and usually they don't chase very far. However, these minor excursions may be enough for them to encounter a small portal. Although they won't come close enough of a portal to trigger the portal just by their presence; they may end up shooting at it, accidentally, when aiming at deer, or intentionaly, because it's blocking their way. If the portal is hit, even if it is exhausted, it will activate for defense, releasing one or two greedlings. If the archer does not have the blessed aim from the statue, they will quicly lose their weapon, and run back to town asking for a new one. But even if they have the good aim, they will end up losing the weapon as the greedling sneaks out in a timing between the shots. On the other hand, if the number of hunters chilling around the small portal is too high, or if the situation lasts long enough, the unwise archers may overthrow the portal. This may not be a good outcome, especially if the retaliation wave hits the Kingdom at an unexpected time. For this reason it is advised not to deforest the areas close to a portal, and not build outer walls around there either.

Kingdom Two Crowns – Archers go much further into the woods outside the Kingdom borders. This allows them to effectively hunt deer on these areas. If they find a portal, they will act in a way to avoid triggering the portal. They'll keep the minimum distance required, and they won't shoot for no reason at the structure. This reasonable behavior grants them long hours of calm and productive hunting. 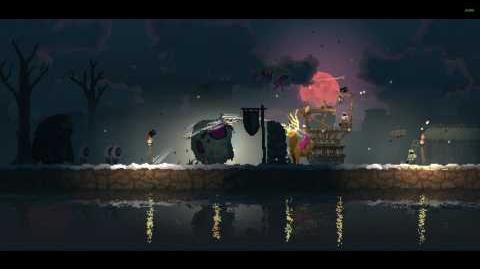 At sunset, all hunters will run to the nearest outer wall, to hide behind it. If one side of the Kingdom has more archers than the other side, then some archers might walk to the other side to even out the numbers. They will not hunt any animals unless they wander nearby.

When the outer walls change

When the outer wall being defended by archers is destroyed by attackers, the archers slowly retreat towards the next outer wall, although they often stop to shoot. This results in archers stopping smaller enemy breaches while they get overrun by the larger ones.

When the construction of a new outer wall is ordered, the archers will start migrating towards the new wall, but will station there during the night, only if its construction is complete. If the new outer wall gets destroyed before they get there, they will not stop migrating, making them run straight into the Greed. This behavior makes new wall constructions late in the day and/or very far from the established wall, very risky.

During the day, some hunter archers will run across the Kingdom, moving from one outer wall to another.

This behaviour is useful during more profitable seasons to bring all the surplus from hunting at the borders to the bank. If the Monarch stay by the town center during the day, these archers will drop the coins around him/her, who can quickly gather and give them to the banker. With this process one can easily increase the coins reserve by forty or fifty coins each day for several consecutive days. It's frequently (if not always) the archers that can't collect anymore coins, that perform these diurnal patrols; which prevents them from hunting and leaving coins on the field for the Greed, and allows other archers with less or no coins at all to go hunting.

This is also useful during the winter in the European biome if there are pikemen fishing and dropping coins all over the ground. Patrolling hunters will gather the coins before they vanish.

If the Kingdom has incorporated sections of wood, the patrollers will help the hunters in the wood by stopping to shoot everytime they see a deer.

The Monarch should balance the Kingdom expansion and the number of archers recruited, so that the lack of hunting at the borders during the day and/or a possible delay for defending the walls at night can not be felt.

For the details on how the Greed can reach archers on towers, see: Archer tower § Protection and vulnerability.

New Lands – Unless they are made soldiers, archers will prioritize filling all available spots on archer towers, starting from the farthest spots, regardless of the time of day. They won't leave a tower on their own. When an archer is captured by a floater, the nearest archer will run to re-man the tower, even if it means running towards an army of the Greed.

While occupying any defensive position, archers won't actively hunt wild animals, but in New Lands they will shoot the deer that wander near them.

Kingdom Two Crowns – Archers generally try to station in empty towers immediately upon construction but they are selective: they avoid filling up towers after a devastating Greed attack which leaves too many empty towers and too few archers on the ground. Also, they do not attempt to station in towers beyond the walls at night time.

Normally an archer does not leave their tower on their own, but they may abandon towers that are too far inland from the outer walls.

The height advantage from the towers allows archers to shoot significantly farther, as well as taking direct shots at enemies below them as opposed to firing over walls. During the day, archers on towers will hunt to all types of animals within range.

[The following content needs to be merged with the sections above.]

A possible complication of towers becoming empty in Classic and New Lands is archers continuously charging into enemy groups while attempting to refill tower spots, often resulting in a steady loss of archers. Furthermore, the kingdom might also run out of hunters on the ground because of archers constantly trying to refill empty towers. The kingdom may lose all hunting income due to this. Unfortunately, like all other given orders, the 'build a tower' order cannot be undone, while towers cannot be destroyed by enemies. The only way to free the archers again is to upgrade a tower to a ballista, a knight tower or a bakery.

Tip for Classic and New Lands – When selecting where to building towers, ensure the availability of ground support in case of Floaters and the complications from their attacks.

In Two Crowns, these complications are less likely to occur because archers are not fully committed to filling towers: after a major Greed attack, when there are more empty tower spots than archers left on the ground, some archers remain on the ground to hunt. Also, as of the Conquest Update, archers in Two Crowns also avoid stationing in towers beyond the walls at night time, which greatly reduces the risk caused by empty towers beyond the walls. In addition, as of the new update, archers on towers continue to hunt all animals.

Whenever a knight or a squire is hired, they will enlist up to four nearby idle archers under their command. Soldier archers always stick with their liege and will attack portals with them, but do not hunt anymore, nor mount towers. In Two Crowns, they also escort the bomb towards the cave.

For the greater accuracy and additional damage granted by the statue to the archers, see: Statue of Archery.

We told them to stop wandering out to towers at night. While we were at it, we encouraged them not to man towers that were really far from the borders either. They'll now abandon towers that end up too deep in your Kingdom and look for something useful to do. We kindly instructed them how to take advantage of their height to shoot farther, and they'll also hunt from their tower during the daytime now, making better use of their spare time.Kingdom developers[1]